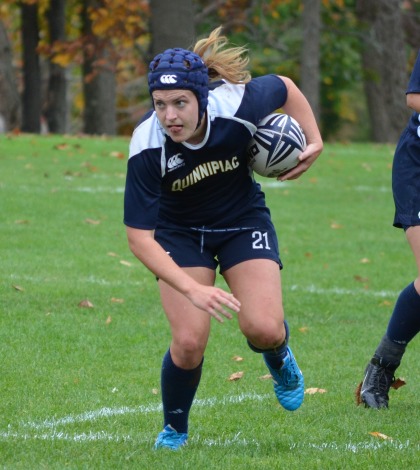 Natalie Kosko’s led the way for the Bobcats with five tries in the win.

“As everyone does, she really brought it,” said Quinnipiac senior Shannon Durkin.

Senior Elisa Cuellar was the first to strike for the Bobcats. Following a long run by Durkin, senior Elena Orlando assisted Cuellar for the try to give Quinnipiac the lead. Graduate student Aine McKeever hit the left upright on the conversion to make it 5-0 Bobcats.

Less than five minutes later, the Panthers countered with a try by junior Hannah Vieth. The Panthers failed to take the lead after Vieth missed the ensuing conversion.

With 13:32 remaining in the first half, Cuellar assisted Kosko on her first try of the game. McKeever then drilled one of seven conversions to give the Bobcats the 12-5 lead.

In the final 10 minutes of the first half, Eastern Illinois missed on three penalty kicks, including one as time expired in the half.

With only a seven-point lead at the midway point, Quinnipiac acknowledged that they had to make adjustments.

“We brought it back in,” Durkin said. “We had to pick up our heads and bring back the energy because we know how to play Quinnipiac rugby. In the second half, we brought it up and played to that level.”

Within the first ten minutes of the second half, the Bobcats increased their lead to 31-5. Kosko, freshman Rebecca Haight, and senior Jennifer Salomon each scored tries that were assisted by Cuellar, Kosko, and senior Raechel Stimson, respectively. McKeever made two of the three conversions.

By the midway point in the second half, the Bobcats had a 45-5 lead.

Kosko ran in her third try along the right side off of an assist from Cuellar. McKeever’s conversion made for a 38-5 lead.

Durkin then scored with 21:38 left in the half off an assist from freshman Megan Johnson. The made conversion gave the Bobcats the 40-point advantage.

The Bobcats were not finished. Orlando scored an unassisted try for the 52-5 edge. Kosko finished off the Bobcats’ unanswered run with two more scores to give the Bobcats the 64-5 lead.

Carlson, who was coaching against her alma-mater, said there was no extra fulfillment in defeating Eastern Illinois.

“There is always going to be that history,” Carlson said. “I think it is not as much a satisfaction as it is being grateful that we have other NCAA teams to be able to play against.”

Looking ahead, Quinnipiac’s next game is at Central Washington on October 25. Carlson said that there is room for improvement following the victory.

“The score certainly does not reflect [Eastern Illinois’] hard, gritty play,” Carlson said. “There were a lot of mistakes that we made today and we are definitely going to look to correct them.”