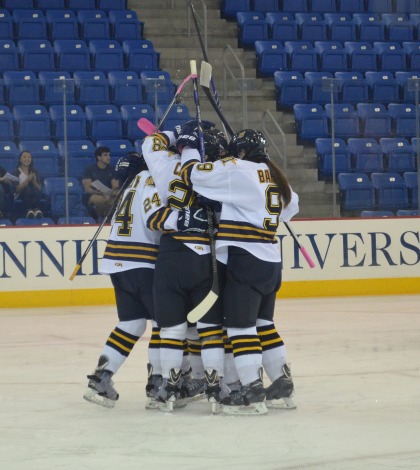 Behind a pair of goals from T.T. Cianfarano and a shutout from goalie Chelsea Laden, Quinnipiac women’s ice hockey beat the Maine Black Bears 4-0 on Friday afternoon at High Point Solutions Arena.

“[After today’s win], we were hoping to be 4-0,” Seeley said, “but we played well for 60 minutes tonight, and we’re really happy with how we are playing overall.”

Cianfarano’s first goal came 5:33 into the first period, as she found the back of the net of a Morgan Fritz-Ward pass to give the Bobcats an early 1-0 advantage.

The freshman leads the team with four goals in four games thus far.

“For Cianfarano to average a goal a game is impressive,” Seeley said. “I can’t say that it’s surprising. She wants to get better. She works hard to improve and is very coachable and open-minded. She’s clearly a marquee player.”

Cianfarano’s scored again off a rebound after Nicole Connery’s shot was blocked on a two-on-one breakaway, making it 2-0 Bobcats.

And for Cianfarano, it’s the first multi-goal game of her young career.

“It’s definitely a special moment, but without the linesman contributing, it wouldn’t have happened,” Cianfarano said.

She added that she follows the lead of some of the team’s older players, whom have helped her so far early in her collegiate career.

“I definitely did not expect to have this much success,” Cianfarano said. “But, I come ready to practice daily. I feel more responsible. There’s a lot of pressure right now, but I bet it will get easier. Coaches say to be prepared and prepare myself mentally. I listen to music, focus, and come ready to play.”

Emma Woods and co-captain Erica Uden Johannson each scored a goal in the second period to put the Bobcats up 4-0.

Chelsea Laden had 13 saves in the win. She has not allowed a goal in three games so far this season, and currently ranks first in the NCAA in save percentage and goals allowed.

“Laden had a solid season last year,” Seeley said. “This year she is even more solid. The sky is the limit for her.”

With the win, Quinnipiac improves to 3-0-1 on the season. The Bobcats look to build on the win in a rematch with Maine at High Point Solutions Arena at 2 p.m. Saturday afternoon.