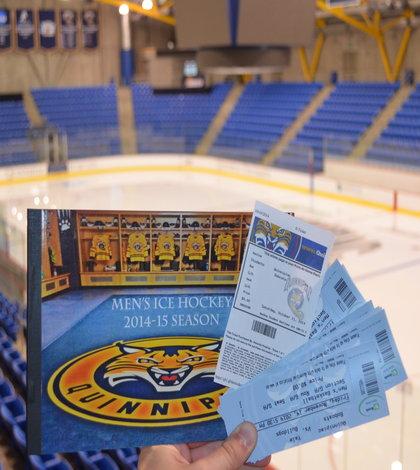 “It was a Sunday night in Hamden, and there were more people on the ice than there were in the stands,” McDonald said, referring to the days long before the TD Bank Sports Center existed.

McDonald thought about that day while sitting in a sold-out High Point Solutions arena last Saturday night during the men’s ice hockey team’s 5-3 win over Bentley in its season opener.

Game by game, year by year, the men’s ice hockey team continues to sell more tickets than the year prior.

“It says a lot about our fans,” McDonald said. “The support, spirit and enthusiasm they bring to the TD Bank Sports Center has just been incredible over the years. When you really look at it, everything has just snowballed into a great situation.”

The Bobcats spent a majority of the 2012-13 season as the No. 1 nationally ranked team, ultimately losing to Yale in the Frozen Four National Championship game by a 4-0 score to end the year.

Quinnipiac spent last season among the top 10 ranked teams once again, losing in the first round of the NCAA National Tournament.

“It’s kind of been a crazy jump since the Frozen Four,” Grgurich said. “People are starting to realize that it’s a program on the rise, and is a program that’s going to be contending for the National Tournament year in and year out.”

Grgurich added that the men’s ice hockey team’s out-of-conference schedule has something to do with the rise in season ticket sales as well.

“We play a lot of Hockey East teams now, which is a very well-known conference,” Grgurich said. “People want to come see them play, too.”

McDonald said the allure of watching games in the TD Bank Sports Center, which opened Jan. 27, 2007, is another reason for the growth in attendance.

“They want to see a winning team,” McDonald said. “And we have great facilities to see the teams in. More and more people are starting to learn about the TD Bank Sports Center, and word of mouth attracts more people to come experience a live game here in all sports.”

Grgurich added that ticket sales aren’t the only number skyrocketing as of late. The student section sold out quicker than ever, as well.

“We sold out in three days,” Grgurich said. “It’s definitely the quickest we’ve sold out the student section and the rest of the arena in the history of this building.”

“And nothing beats a sellout,” said McDonald. “When the arena is packed like it was on Saturday night, that atmosphere beats just about anything.”

Grgurich said The Bank has elected to stop selling season tickets at this point, and will sell the remaining tickets in different ways.

“We have the student section, which we would never touch,” Grgurich said. “We make sure the students get to come and see these games. We also want to give some tickets to schools and youth groups we’ve worked with in the past.”

Grgurich even added that some tickets will be available on game days, but not as many as there once were.

“With the way tickets are flying off the shelf I don’t know that we’ll have as many as we once did,” he said with a laugh.

He added the university has no current plans to add seats into High Point Solutions Arena to fit more fans.

“Our biggest problem is that the best seat in the house is standing,” McDonald joked. “You really get a great view from the vantage point on the concourse. At this point, we have no plans to add seats.”