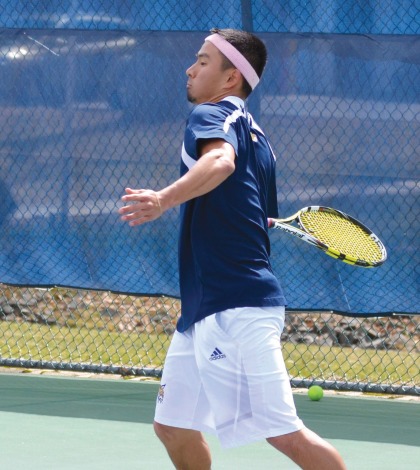 On Oct. 3, 2014, Eric Ambrosio claimed the Quinnipiac men’s tennis Division I program record for all-time singles wins, solidifying himself as one of the best athletes to ever step foot at Quinnipiac.

However, his goals for tennis go far beyond his individual accomplishments.

“[The singles record] is definitely nice to have,” Ambrosio said. “It is always a good thing to get some personal achievements. At the end of the day, I still want to get wins for my team. It is a nice accomplishment, but I still want to go out with a championship.”

Ambrosio grew up in Lloyd Harbor, N.Y., and was raised by his parents Nancy and Richard Ambrosio. He attributed much of his early love for tennis to his father.

“My dad would take me out into the backyard and would feed me balls for as long as I wanted, from when I was 7 years old until I was 12 years old,” Ambrosio said.

Tennis wasn’t the only sport Ambrosio excelled at when he was younger. He played numerous sports throughout his childhood, including basketball, baseball and golf.

He said it came down to golf and tennis for him before he ultimately chose tennis.

“Almost every sport had something to contribute to tennis,” Ambrosio said. “I played baseball. When you throw, it is very similar to a serve. In golf, you follow through on your swings. It all connects a little bit.”

He helped his team toward four straight Conference, Nassau County and Long Island Championships. In his junior and senior year, Ambrosio was named to the all-state team.

At one point, he even reached No. 141 on the national rankings list by tennisrecruit.com for the high school class of 2011.

Still, Ambrosio is not concerned with the ranking from his high school career.

“I used to care when I was much younger, but as I have gotten older, I realized rankings are not as important,” Ambrosio said. “I try not to focus on it too much.”

Ambrosio was looking at Quinnipiac, Fairfield University, Marist College, Villanova University and Boston University when deciding where he wanted to play collegiate tennis. He was only looking for schools in the Northeast, as he didn’t want to be too far from home.

“Once I came here, I stepped on campus and felt at home. It felt right,” Ambrosio said. “That’s why I chose to come here.”

In Ambrosio’s first season as a Bobcat he went 14-13 in singles and 13-13 in doubles. The numbers don’t tell the full story of that season, though. Ambrosio earned what he called the most fulfilling win of his tennis career that season in the NEC Championship on April 15, 2012.

“It felt really good to be contributing to my team as a freshman with all of my teammates being upperclassmen above me,” Ambrosio said.

“His best strength is that he is able to get people playing to [his level] instead of playing at other people’s levels,” Pappas said. “He dictates pace and that is something you see with a lot of guys that it takes a while for it to come around. He is confident in his ability, stays the course and makes it happen.”

Ambrosio credited some of his physical abilities as his greatest strengths.

“[My strengths are] my speed, my endurance, and my forehand,” Ambrosio said. “I use my speed to get around the court. It allows me to get into position for everything else so that I can keep the ball on the court, not miss and force other guys to make mistakes.”

Pappas also added that, in addition to his individual accomplishments on the court, Ambrosio serves as a leader to his teammates.

“And he has been a leader for the past two years,” Pappas said. “He is so competitive; he does not give up on one point. He fights every point as hard as he can. The guys around him feed off of that. He is always working hard; he’s the first one here. He puts in the time and effort with practice and all of the other abilities to make him better.”

Ambrosio added that he tries to keep a team-mentality in mind in everything he does, and he tries to make sure the team is always in the best position to win.

“I try my best to stress doing everything as a team,” Ambrosio said. “It is all about doing everything cooperatively and as a team. I try to push that with everything from being on time, to working hard during practice and even off the court too. I want to make sure they are doing all of the right things off the court, like getting their work done.”

Pappas added that Ambrosio’s ability to remain even-keeled on the court has brought him a long way.

“What makes him special is–and last year is where he really developed this–is that he truly knows what kind of player he is,” Pappas said. “He knows how to get his points. He does not deviate from his plan. He really knows what he is doing on the court. He does not panic if his shots are not falling early. He stays with it and knows eventually it will start coming around. He does not play other people’s games.”

And for now, on the tennis court, Pappas expects Ambrosio to keep having the success he’s been having.

“I expect him to keep dominating,” Pappas said. “He was a tough out [last year]; he barely lost a match. This year, I expect to see similar, if not better, results. He is that constant for me. He is going to compete as hard as he can. If somebody beats him on a particular day, it was well earned. He brings it every single match.”