A new mode of transportation 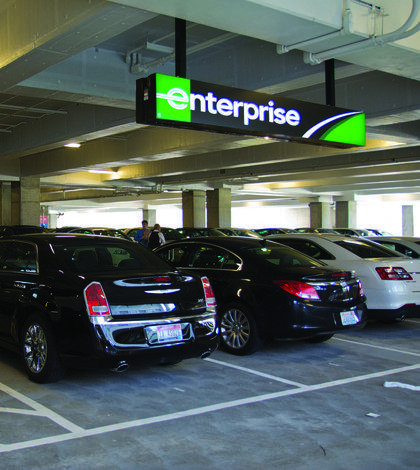 Students will soon be able to rent cars to travel off campus for an hour or an entire day.

The Student Government Association will implement a new car-share program with Enterprise Rent-a-Car on Jan. 20, according to Class of 2017 representative Cassidy Fitzgerald.

“Considering our first year students are not allowed to have cars on campus I think it is going to be a very quick inexpensive way to get around town in addition to the shuttle service,” Associate Director for Campus Life Stefano Fasulo said.

Class of 2017 President Chris Desilets said that to start, there will be two five-passenger cars on campus.

If there is a need for more cars within the first year of the program, SGA will only be able to add two more cars, Desilets said. The cars will be parked in North Lot behind the Faculty Office Building.

Assistant Dean and Director of Campus Life Daniel Brown said the program will pay for itself because students have to sign up and pay a membership fee to rent the cars.The memberships are through the Enterprise company and not the university. Students must show a valid driver’s license to sign up.

The cost for renting a car has not been decided yet, but will be before the program is launched. The price will vary depending on how many hours the car is rented, not the distance traveled, Desilets said.

Freshman Kelsey Ferrara said she plans to use the program when it is implemented. She thinks mostly freshman will use the cars because it will allow them to go out on the weekends and not feel trapped on campus.

“Personally I think I might use it for places the shuttle won’t bring me to, but I’m not sure how much other classes would take interest to it,” Ferrara said.

Fitzgerald said the idea for a car-share service came from Fasulo.

Fasulo worked in student affairs at Hofstra University for four years prior to working at QU and helped implement a similar program there; he said having a car share program was something SGA talked about in past cabinets.

SGA chose Enterprise because it was the best fit for the community, Fasulo said.

“Enterprise is very in tune with our needs and had parameters that worked well with our needs,” he said. “Since the relationship had already been established, they worked out details which made it work for QU.”

Enterprise was very eager to come here and work on this program, according to Fitzgerald.

Fasulo said there was a similar program for student organizations to borrow university cars to travel to off campus events, but the cost-to-benefit ratio was not worth the investment.

“The maintenance upkeep of the cars was expensive,” Fasulo said. “Safety without a doubt is our priority and we wanted students and faculty being transported in cars that were working properly.”

Junior Colton Hoffman said he does not have a car on campus and will definitely use the program.

“Bringing a car to campus is hard for many students especially ones who live far away,” he said. “I live in New Jersey and it is hard for me to bring my car to campus and also the gas prices here are outrageous so it makes it easier to leave it home.”

Desilets said the program is important because the shuttle does not stop at every place students need to go, but he and Fitzgerald agree that just like any other initiative, there is a risk if the privilege is abused.

“I think students are responsible enough to know they shouldn’t take it to Toad’s,” Desilets said.

Fitzgerald said if SGA notices people are taking the cars to New Haven to go to Toad’s, they will have to limit the amount of hours students can rent a car.

Fasulo believes students will use it to their benefit as opposed to abusing it. He hopes this program has a positive impact on the student body.

“This wasn’t something that was on our radar but SGA made it possible and I am excited for the QU community that this will be implemented,” he said.