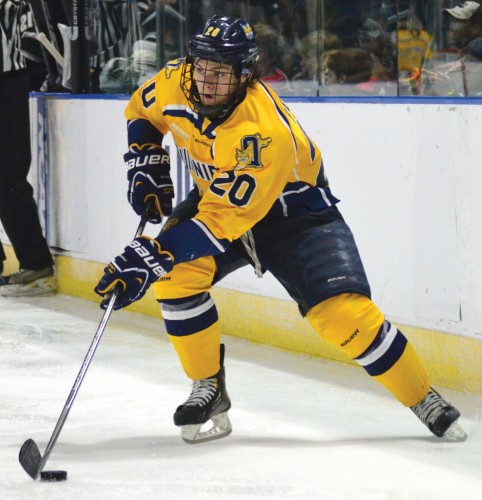 So heavily, in fact, that Peca is the Bobcats’ x-factor heading into the 2014-15 season.

Peca tallied 38 points last year as a junior, scoring 12 goals to go along with 26 assists. And with 107 career points, he’s the fifth-highest active scorer in all of Division I hockey.

And still, there’s great room for improvement in those numbers based on both his skill set and the situation he’s in this year.

In the first half of last year, from October to the end of December, Peca recorded only 13 points.

The second half of the season, from January to March, was a completely different story altogether. The Ontario native tallied 25 points during that stretch, nearly doubling his first half production as the Bobcats skated to a top-10 finish in the national rankings for the second-straight year.

Peca’s second half was indicative of what most had expected his full junior season to be like. He skated fast, found the puck in good position, and played to a high level in virtually every appearance on the ice.

If he had played to his second half totals during the first half of last season, Peca would have ended up with 50 points. That would have made him one of the nine best scorers in the country, and he would have led the Bobcats by a wide margin.

Couple that with the fact that Peca will play alongside Sam Anas to start the season, as Quinnipiac head coach Rand Pecknold said during Quinnipiac Men’s Ice Hockey Media Day on Sept. 18, and it looks like all signs are pointing upward for his senior year.

Anas led the team with 43 points during his freshman season, winning the NCAA Division I National Rookie of The Year award in the process. He played alongside the Jones twins on the first line for Quinnipiac, and both Kellen and Connor had fantastic years, putting up 42 and 38 points, respectively.

But this year’s first line presumably won’t have three standouts, at least to begin the season. There are only going to be two big names, Peca and Anas, that will skate together.

The Bobcats lost three of their top five scorers from last season’s squad, returning only Peca and Anas from that bunch.

The veteran offensive presence of Jordan Samuels Thomas and the Jones brothers is gone, and it’s Peca’s time to carry the load for Quinnipiac.

Pecknold has elected Peca and defensemen Dan Federico as captains this year, which Peca weighed in on during Quinnipiac’s media day.

“It’s definitely more responsibility,” Peca said. “I think it’s pretty big shoes to fill, but it obviously means a lot to us because it shows [Pecknold’s] confidence in us.”

But captains aren’t inconsistent—they show up ready to play night in and night out.

The Bobcats need Peca to be a consistent scoring source during every month of the season. Quinnipiac isn’t as deep on the scoring end as it was a season ago, so they’re counting on Peca to pick up some of the slack.

He can’t afford to have another 13-point first half.

Peca is talented, more talented than a normal college hockey skater. He might be only five-foot-nine and 165 pounds, but he’s savvy with the puck and has a knack for finding the back of the net. For all these reasons, he’s going to be expected to have more than 38 points this season.

And if he does that, and is a constant force on the offensive end, Quinnipiac has a good chance at reaching its ultimate goal in getting to another Frozen Four.