From soccer to scrums 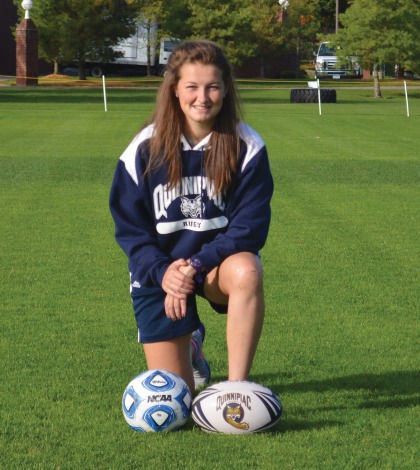 After four years of playing for the Quinnipiac women’s soccer team, Aine McKeever is still dressing in a Bobcat uniform.

McKeever, a graduate student, has donned the number four jersey for the women’s rugby team in 2014, just like she did during her four-year stint on the pitch with the women’s soccer team.

But rugby hasn’t always been something familiar to McKeever, not the way soccer had been. In fact, she just started playing and learning rugby a month ago.

Prior to coming to Quinnipiac, McKeever played Gaelic football, the national sport of Ireland, along with soccer while growing up in Derry City. McKeever helped her team win the Oliver Garvan Cup in 2010, and was awarded the Gaelic Football Players Player Award that same year.

For McKeever, learning rugby was easy because of her past in Gaelic football.

“It has some similarities to rugby, so that is how it caught my interest when the opportunity came,” McKeever said. “Going from a game where you only really use your feet to a game where handling the ball with your hands is important, Gaelic football has definitely helped me with that.”

That opportunity came when McKeever was recruited by women’s rugby assistant coach Michelle Reed in July. Reed knew that McKeever had one more year of eligibility in a different sport and told her to think about the possibility of joining the rugby squad.

“She’s a phenomenal athlete, and we thought she would be a good fit,” Reed said.

It only took one day for McKeever to think about it, then she went to Reed and head coach Becky Carlson to confirm that she was joining the team.

For McKeever, she has had the support of her teammates and coaches to help her adapt to the new sport.

“It’s been too good to be true honestly. The team has been fantastic and the coaching staff has been great,” McKeever said. “You can’t teach the team chemistry that we have, and I can’t thank them enough.”

Carlson feels it has been McKeever’s leadership and athleticism that has helped her adapt so easily.

“When I explain something for her to do, she will do it once and do it perfectly,” Carlson said. “That is a very rare thing to find in a person.”

In Carlson’s eyes, converting an athlete into a rugby player is easier than most believe. She compares it to the difficulty it would take to try baseball or softball with no experience prior.

“It’s easy to teach someone to run, kick and pass rather than teach someone to step in a batter’s box and try and hit a ball,” Carlson said. “Rugby is the grace of soccer, the speed of track and the power of football all together. Aine brings all those characteristics to our team.”

Carlson sees that McKeever has potential in rugby because of her experience in soccer.

“I love crossover athletes because they can bring over so much from their former sports to our team,” Carlson said. “I will relate something that we are teaching her to something in soccer and she’ll understand it.”

Carlson also sees leadership from McKeever, and she believes that comes from her experience on the soccer pitch.

“It take a lot to join a sport that she has never played before and be vocal, but her leadership still shows,” Carlson said. “She is confident in the things that she knows.

McKeever also gets to use some skills she received from soccer by kicking conversions for the Bobcats. Most recently, McKeever went four for six in conversions on Sept. 27 against Norwich.

“Playing soccer has given me the confidence and experience to kick the conversions for the team,” McKeever said.

For McKeever still misses soccer at times. However, winning with the women’s rugby team is a great way to relieve those feelings, as she puts it.

“I still miss the sport, it’s a religion to me,” McKeever said. “I made some great connections from the team, but I didn’t achieve what I wanted to achieve in soccer, but I’m hoping I can live the dream through another sport.”

Carlson, meanwhile, is excited and optimistic about having adding      McKeever to the team.

“It’s been fruits of the loom awesome for us,” Carlson said.