Dealing with a degenerative disease 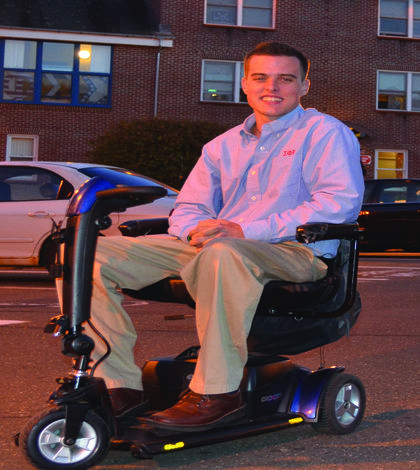 It all happened at a basketball game.

Joey Mullaney was sitting on the bench; he had been doing this for a couple of games and he was starting to get fed up. Mullaney watched his twin brother, Sean, dribble across the court. He watched his legs move as he sprinted back and forth, his body covered in sweat because he had played the whole game.

And when the final whistle blew and Joey still had not moved from the bench, he was more than upset. Why wasn’t he playing? Why had he been sitting out? Yes, he was not as fast as his brother, but was he really getting worse?

It was that night his parents told him the news. Holding back the tears, the 13-year-old sat with his family and was told everything.

Joey Mullaney had been diagnosed with Friedreich’s Ataxia, a rare degenerative neuro-muscular disorder.

About one in 50,000 people in the United States have the disorder, according to the Friedreich’s Ataxia Research Alliance (FARA).

Joey and his older sister are a part of that fraction.

His twin brother Sean says that was the worst night of his life. He was made aware of the diagnoses, but his family had decided to wait to tell Joey until they really needed to.

Until that point, Sean says, he tried not to accept that his brother too had the disease. He did not think another one of his siblings could have been diagnosed.

“I was young and I kind of wanted to think it wasn’t going to happen,” Sean said. “But then I started to see changes in the way he ran and the way he walked and that is when it really hit me and that is when my parents kind of knew too that he couldn’t wait any longer and he needed to find out.”

Joey is one of four. He and his twin brother Sean are 19. His oldest brother Ryan is 26 and his sister Kayla is 24. Kayla was diagnosed with the disease when she was young and Joey watched her struggle with it.

When a person has Friedrich’s Ataxia, it is because their body has a genetic mutation that limits the creation of frataxin, a protein that helps move iron and form iron-sulfur clusters in the body. With the disease, the spinal cord and peripheral nerves degenerate, according to FARA.

His ankle wouldn’t turn like he wanted to. It just didn’t move.

He got up, shook off the fall and told himself he had just worked out too much. But his mind was really racing. This disease was real, and he was really starting to feel it.

But he kept instances like to himself. He didn’t tell anybody what he was going through; anybody except his twin.

“He is my biggest fan, biggest supporter,” Joey says. “He has always been there for me no matter what.”

It was the first week of their junior year when Joey and Sean finally informed the student body at his high school, Lawrence Academy, of what was going on.

“I think he accepted it but didn’t want everyone else to know yet,” Sean said. “And then junior year it was obvious and at that point Joey was like ‘okay I need to do something.’”

Sean got up at an assembly in front of the school and explained Joey’s disease to everyone. He told them about why Joey had been struggling to walk. He answered the unanswered questions.

“It was at that point Joey started to be significantly more confident and everyone was there to help him and he wasn’t trying to hide stuff,” he said.

The last two years of high school passed by and it was time to pick a college.

Joey only toured a few schools; he had to think about how accessible it would be for him. In the end, he only applied to Quinnipiac.

But the decision process was not easy for him or Sean.

“I always knew that I wanted to play baseball in college it was just a matter of where,” Sean said. “In the back of my mind I really didn’t want to have to chose to go anywhere until I knew Joey’s situation and where he was going to go and I wanted to be closer – not the same school but just be near him – but then it eventually came to a point where it just wasn’t going to happen. And I was really upset with it.”

But with his cousin and close school friend also attending Quinnipiac, Sean says he was happy with Joey’s decision. Sean later chose to attend Bowdoin College in Maine.

“I really never told him but in the back of my mind I wanted to just know that he was going to a place where he was not only going to be accepted but had friends their prior.”

Sean says he knows now how much of a support system Joey has at Quinnipiac, but even so he is just a phone call away. 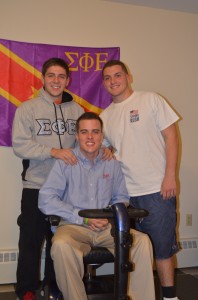 ***
Symptoms of Friedreich’s Ataxia include loss of coordination in the arms and legs, fatigue, vision and hearing impairments and slurred speech, according to FARA.

College was the first time Joey moved to the scooter. Prior, he had more strength, but knew in college he was going to need it.

“Coming into school I was very afraid I didn’t know how people would treat me,” Joey said. “But the guys on my floor and my roommate were very supportive of me right away.”

Joey moved onto campus in the Fall of 2013 into the Mountainview residence hall. Just down the hall lived Matt Blumenthal, Mike Rocco and Jon Nanna. All four became friends freshman year, and all four are now members of the Sigma Phi Epsilon fraternity.

Joey says the key is not acting like he is disabled.

“The key is to be yourself and I really think that is what helped me make friends here,” he said.

Nanna, Rocco and Joey all live together now.

“I think it has made me a lot less selfish,” Nanna said. “He has become like my brother. I would take a bullet for him. I think he has shown me what having a true brother – a true best friend – is all about.”

Rocco feels living with Joey has impacted him as a person.

Rocco and Nanna think he changes the lives every person he interacts with and are honored to be as close as they are with him.

After seeing some of his friends join a fraternity in the fall of their freshman year, Joey decided it was something he wanted to be a part of it. And now, he says it was a great decision.

“I get the term brotherhood but they honestly define that and maximize that,” Joey said.

And the brotherhood is supporting Joey every step of the way.

Blumenthal had become a good friend of Joey’s. He had helped him as much as he could freshman year, but he wanted to help with something long term.

“As his group of friends, I feel like we need to be doing something more to help him, not just with his daily life but something that will make a difference long-term” Blumenthal said.

After researching, he learned about a bike race, “Ride Ataxia” that was going on near his home in California through FARA. Blumenthal signed up right away. With Joey’s consent, he sent a link to his brothers letting know he was going to do the race. Within one week they had raised $1,200 and eventually Blumenthal raised nearly $1,600.

After following the race and talking and seeing others like Joey, Blumenthal decided he wanted to bring it back to Quinnipiac.

Now that idea has become a reality.

FARA and Sigma Phi Epsilon teamed together to bring a bike ride to campus on Sunday, Oct. 12.

That same day, thousands of riders will ride for FARA in Philadelphia.

The ride here will start at 10 a.m. near the Westwoods parking lot. It will consist of five miles on the Farmington Canal bike path through Cheshire and five miles back.

From 12-3 p.m., Sigma Phi Epsilon will hold a reception on the basketball courts outside the rec center on the Mount Carmel Campus. There will be food, games and raffles all to raise money.

“I cant stop smiling when I think about it,” Joey said. “What they are doing for me right now is incredible. I never thought this would happen, I just thought we would be very close, but when I say that they are my brothers they really are because I care about them as much as they care about me.”

Joey hopes the event will have a big turnout. He wants to inform people about his disease and fight it. 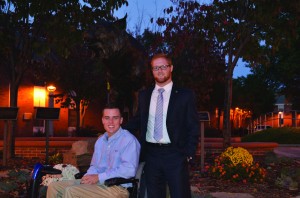