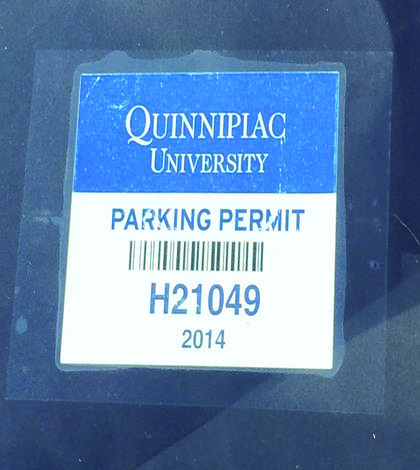 Forging an authorized parking decal would be a felony out in the real world. But this school year, students are forging university-issued parking decals without hesitation or fear of punishment.

Public Safety is currently ticketing and towing cars with fake decals, according to Chief of Public Safety David Barger. Though he said each case is handled in its own manner, the risk of permanently losing parking privileges is possible.

“Students should be aware of the ramifications of their actions before carrying them out”, Barger said.

Sophomore students have been forging parking decals in the Hilltop parking lot on the Mount Carmel campus, according to Barger.

“The greatest problem we have is with the Hilltop lot,” Barger said. “It’s primarily sophomores doing it [making unauthorized parking decals].

But Barger said it isn’t just the sophomores making the passes. Freshmen students have been making fake decals as well.

The parking system is based off a random lottery, according to Shannon Grasso, parking and transportation coordinator at Public Safety. Freshmen are not allowed to have any cars on campus. However, sophomore students can either get a parking decal for the Hilltop parking lot or the Westwoods parking lot, which is off campus.

Grasso said students contact her on a daily basis, claiming to see open parking spaces in the Hilltop lot and ask to be granted a decal allowing them to park there, not realizing the impossibility behind their requests.

There are many students who register vehicles they won’t bring to campus until after Thanksgiving or winter break, according to Grasso. Though there appear to be open parking spaces, Grasso said there are never unassigned parking spots in the Hilltop lot.

“When you look at the Hilltop lot, there are open spaces,” Grasso said. “It paints a picture that there’s space available that we’re not giving to someone. Those spaces really belong to someone who registered a vehicle and, by lottery, was given a Hilltop decal.”

Still, this doesn’t stop students from finding ways to get access to Hilltop parking, according to Grasso.

Sophomore Toni Santillo thinks the sophomore class should be given more parking spaces since they are one of the biggest classes on campus, but she doesn’t agree that students should be making fake ones and selling them.

“The fact that people are making fake decals and are selling them is crazy and the fact that people are actually buying them, knowing they’re going to get caught is stupid,” Santillo said. “Instead of trying to work around the system why don’t they try and work something out with the people that are in charge.”

And students aren’t being very secretive as to how they are selling the passes.

“The sophomore students actually post on social media that they have passes for sale,” Grasso said.

Since the social media platforms are public forum, Grasso said the Public Safety office is using the social media sites to their advantage to keep the distribution of parking opportunities fair to all students.

But Barger said it is about more than just the fairness aspect. He hopes the situation will have a positive overall outcome by forcing students to learn from their mistakes.

The Public Safety office hopes to use the public social media postings to protect students who may fall victim to the illegitimate system that the sophomore students have created, according to Barger.

Grasso said she has seen students offer to sell their decals for $125 to $500.

Freshman Robert Cantafio said it is “ridiculous” that students are creating fake decals and selling them for so much money.

“Why are you going to pay $500 dollars for a decal? You shouldn’t be creating [fake decals] and selling them,” Cantafio said.

After several meetings with the Student Government Association, Barger and Grasso said they hope to alleviate the parking issues. They have strongly emphasized that students can request to be put on the Hilltop waiting list, available in the Public Safety office.

Cantafio said parking decals may not be forged if the university had more on-campus parking available, but at the end of the day this is an issue among the student body.

“Your decal is only good for you,” Grasso said. “It’s not transferable. You’re not supposed to create fraudulent ones and sell them. You can’t give them to a friend. Turn them back into our office and we will reassign [the decal to someone else].”