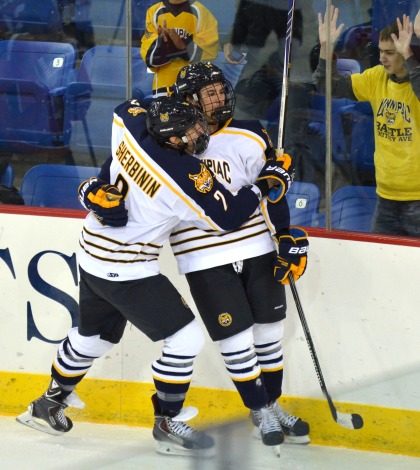 Despite a good start with an early goal, the men’s ice hockey team fell to Acadia in an exhibition Saturday night by the final score of 4-1 at High Point Solutions Arena.

“I think we played good in the first period and then our youth showed in the second and third,” head coach Rand Pecknold said.

The lone goal of the first period came from sophomore Tim Clifton. Clifton drilled a one-timer from from junior transfer K.J. Tiefenwerth into the back of the net to make it 1-0 Bobcats.

Defenseman Derek Smith hit a slap shot off Acadia goalie Brandon Glover, which was rebounded by Tiefenwerth who then dished it off to Clifton for the goal.

Acadia came up with several scoring chances toward the end of the period, but freshman goalie Sean Lawrence kept the lead for the Bobcats.

The second period was all Acadia, as they put three goals past Lawrence. Joel Ridgeway scored the first goal on a breakaway, skating past Anas and putting it top shelf on Lawrence for a shorthand score.

“A couple guys were lazy on the first goal,” Pecknold said.

Acadia went 2 for 3 in the second period on power play goals. Boston Leier scored just 17 seconds after a tripping call on Jonah Renouf.

Zachary Franko then finished the scoring in the second period with a goal on a five-on-three advantage. Franko slapped the puck in on a wide open net, following a Connor Clifton interference call and a Kevin McKernan tripping call.

“The young guys just made a couple of bad decisions on the power play goals,” Pecknold said.

Quinnipiac went 0-3 on the powerplay in the second period.

Sophomore Jacob Meyers came in for the third period to relieve Lawrence in net for the Bobcats. Lawrence posted 14 saves on the night and allowed three goals in the first two periods.

Acadia’s Mike Cazzola extended the lead to three with a wrist shot that slipped past Meyers with less than six minutes to play in the game, making it 4-1.

Sophomore Sam Anas came up with a couple of scoring opportunities throughout the game, hitting the post twice.

Ultimately, Pecknold sees the game as a stepping stone heading into the season opener. The Bobcats open up their regular season against Bentley next Saturday at the TD Bank Sports Center.

“We got a good evaluation of the freshman, guys that are fighting for a spot on the lineup, and I think that this game will help us,” Pecknold said.