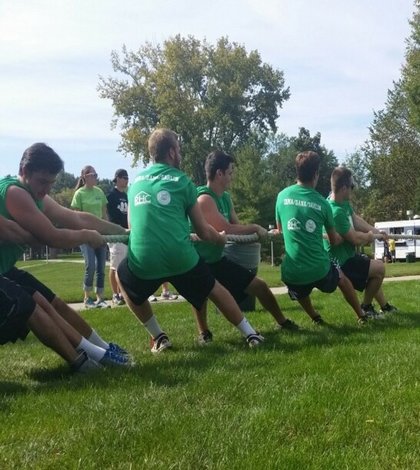 Students from residence halls all over campus competed in Hall Brawl on Sept. 28 from 10 a.m. to 4 p.m. on the Quad.

The event was cosponsored by Residential Life and the Residence Hall Council, according to the RHC President Richard Cote.

Cote said it is important that students know that this event is not the same as Hall Wars, an event held for the past ten years by the fraternity Sigma Phi Epsilon.

“We needed to make this event fit for our organization as opposed to the way they had set it up in the past,” Cote said.

Adviser of RHC Caitie Abrahamson said RHC was not presented with the option of working with Sigma Phi Epsilon for Hall Brawl this year.

“Residential Life asked us if this event would be something we were interested in doing and we said yes under the assumption [Sigma Phi Epsilon] was not allowed to host the event again,” Abrahamson said.

President of Sigma Phi Epsilon Charlie Doe said they did not cosponsor the event this year because they did not have the funding to make it profitable for their charity organization.

“Coming into this year we were aware we did not have the finances to make this a successful fundraiser on our own,” Doe said. “We had to move away from it as our main fundraiser, but the school viewed it as a successful event so they asked RHC to take over and continue the event because we couldn’t.”

Doe said he was pleased that RHC has continued to make Hall Brawl an event on campus.

Sigma Phi Epsilon and RHC cosponsored Hall Wars together last year. Last year, 32 teams signed up for the event, but only 17 showed up to compete.

Doe said Residential Life cosponsored with Sigma Phi Epsilon in the past but stopped because they did not want to favor a fraternity over other organizations.

“We hope to see a great success for the RHC and Hall Brawl this year and in the future,” he said.

There were 18 teams participating from various residence halls on campus according to Cote. Each team had a Resident Assistant as the team captain. There were eight different events ranging from dodgeball, capture the flag and minute-to-win-it challenges based off of the television show.

The winning team was from Irma/Dana/Sahlin headed by sophomore RA Justin Downey.

Freshman Keven Neira was a member of the winning team and said he almost did not participate in the event.

“There were only originally two people signed up on our team until my RA Justin went around to our rooms and asked us all to join,” Neira said. “I’m so glad I did because it turned out to be a really great time.”

The winning team is receiving a pizza party as a prize, according to Neira.

Side events were going on for the teams when they had down time between competitions, such as sumo wrestling and jousting. Food trucks were on the Quad for students to buy food throughout the event.

Cote said RHC’s main goal was to have a friendly competition between all of the residence halls on campus.

“We tried to make this a campus wide unity event. It was basically college’s version of field day,” Cote said.

Cote said the biggest difference between Hall Wars and Hall Brawl is that it is not just for freshmen participation.

“Freshman were normally the only ones who could participate [in Hall Wars] and it wasn’t really offered up to the other classes,” Cote said. “We decided to open the participation up to every residence hall on campus and invite members of all of the classes to participate too.”

Freshman Quinn Adams said there was a mixture of people from all classes and he was able to meet a lot of people he didn’t know before the event.

“I felt like I got to know a lot more freshmen that I didn’t know before, but it wasn’t all just freshmen who were there,” Adams said.

Cote also said another difference was that not all of the challenges were athletic to cater to non-athletic students.

“We made it so you don’t have to be super athletic to participate in the challenges so that no one felt left out,” Cote said. “It wasn’t meant to be super competitive, it is more so that students can have fun.”

Junior and Vice President of RHC Shannon Rex thought the event was successful and that students were having a good time.

“I think the teams were really excited to be a part of the event,” Rex said. “I saw a lot of effort from all the teams who came out today which was really nice. I think students would love to see the event against next year.”

Neira said he thought the event was very fun and was glad he got to bond with the people in his hall.

“We are all in the three plus one program so it was another chance for us to get to know each other more and we all had a great time,” he said.