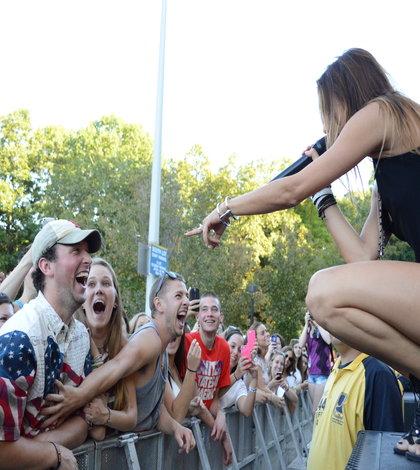 Jana Kramer took the mic away from her mouth and stretched her hands out to both sides. The audience could be heard, singing along with Kramer to Garth Brooks’ “Friends in Low Places.”

Kramer brought the mic back and sang “Cuz I’ve Got Friends at Quinnipiac University.”

A scream erupted from the crowd of an estimated 2,000 students, many decked in plaid shirts and jean shorts at Saturday’s Fall Fest concert in South Lot.

“There was a tiny stage on the side and I could stand on it to see how many people were there,” she said. “And it just was really a crazy feeling to see everyone singing along to her songs and having a really great time.”

Loeser said she was very satisfied with how the event went.

“I had fun the whole time, so that’s how you know it ran smoothly because I wasn’t dealing with a bunch of crazy problems,” she said.

Barham opened the concert with fellow country artist John Griffin. Barham and Griffin sang a few original songs, such as “17 and Young” and “More than a Cotton Dress.” They also sang several cover songs, including Tim McGraw’s “Just to See You Smile” and Hunter Hayes’ “Wanted.”

Loeser said Barham got close with the SPB Mainstage crew and took several selfies with them.

“He had said—which I thought was really cool—no one has ever treated him as wonderful as Quinnipiac had,” Loeser said. “He wasn’t used to being treated like such a superstar and he had his own dressing room. He was just so humble and awesome.”

Barham was named one of Billboard’s “10 Country Artists to Watch for in 2014.”

“I definitely think we might have snagged someone who might be really big in the future,” Loeser said.

Then The Henningsens took to the stage. The band, consisting of father Brian Henningsen, daughter Clara Henningsen and son Aaron Henningsen, performed several original songs, including “American Beautiful” and “Jesus or a Bullet”. The band also sang songs they had written for other country artists, such as The Band Perry’s “You Lie.” Loeser said she enjoyed hearing this song.

Kramer started her performance off with “Don’t Touch My Radio,” a song off her upcoming album. She then sang a mix of cover and original songs. The audience sang along when Kramer covered Alanis Morissette’s “Ironic” and sang her own popular songs “Whiskey” and “Why Ya Wanna.”

Junior Lauren Kaplan said she enjoyed how funny Kramer was and how she connected with the audience.

“I thought it was amazing [SPB] actually picked someone this year that you could relate to that a lot of people listen to,” Kaplan said.

Kaplan said she and her friends are “One Tree Hill” fans, so they were excited when they heard Kramer would be headlining the concert.

“[Jana] was really sassy and entertaining,” McCall said. “Whereas I think Love and Theft was more just performing which was fun…but I liked that she wasn’t just singing.”

“[Last year] was very energetic,” she said. “The artists themselves very energetic, their songs were good, people knew them, people wanted to be there….[This year] you just went because it was Fall Fest.”

Loeser said she could not say how much each of the artists cost, but that the students got a good deal with Kramer.

“I think Jana was a lot cheaper than she should have been for the quality of the concert that we got,” Loeser said. “So we’re really incredibly lucky that she has such a humble price because we got someone really big to come here and blow us all out of the water.”

Loeser has been planning Fall Fest ever since last year’s spring concert, along with the Mainstage committee and six other SPB directors.

“This is the best experience for Fall Fest that I could have asked for,” she said. “I’m a senior so it’s my last and I’ll definitely remember it forever.”