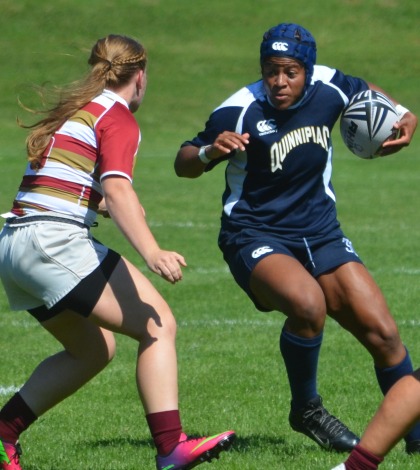 Norwich University handed the Quinnipiac women’s rugby team  its first lost of the season  on Saturday afternoon, as the Bobcats fell 45-38.

The Bobcats scored two tries toward the end of the game, but the attempt was cut short as time ran out.

Natalie Kosko had her best game of the season, scoring three tries along with two assists. She now leads the team with eight tries and four assists in three contests this year.

It was Quinnipiac’s first match since Sept. 6, when they beat Army 50-17. A scheduled game for Sept. 13 at Dartmouth was cancelled.

“You would think that [we were rusty],” Quinnipiac head coach Becky Carlson said. “I was thinking that too in the beginning, but that certainly wasn’t the case. The two weeks off certainly helped us health wise. I think we were rested, I think we were ready.”

Norwich, the reigning ACRA Division-I champions, proved to be something the Bobcats hadn’t seen all season.

“Norwich plays a fast brand of rugby,” Carlson said. “They’re in and out of the rucks, pretty lightning quick. That’s not something we saw in our first two games and now it’s something we’re constantly seeing, which is really positive for us.”

Emily Oor recorded the first score of the game for Norwich, as the Cadets held a 5-0 lead after a failed conversion.

Elena Orlando then assisted Kosko with a pass that Kosko took all the way up the sidelines and into the end zone for Quinnipiac. After a successful conversion of the foot of Aine McKeever, the Bobcats took an early 7-5 lead.

The Cadets defense would shut down Quinnipiac for the rest of the first half, adding two more scores along the way. It made the score 19-7 going into the half, and the Bobcats had to make adjustments.

“We needed to maintain the ball,” Carlson said. “Whenever Norwich got it back, we had a hard time stealing the ball and getting it back. I think the difference in there was our forward support play in the back line. Whenever our backs had it, our forwards were right there on the inside shoulder to grab the ball and I think that continuity helped us.”

The Cadets came out strong in the second half, though, scoring 12 straight points at one point, making it 38-12.

The game seemed out of reach, but Kosko would soon find a lane down the center of the field for her longest run of the afternoon.

Orlando and Kosko then linked up again for a score. Orlando was almost brought down, but was able to hand the ball off to Kosko and she broke the plane for the score.

Then, after trailing, 45-26 with about 10 minutes remaining in the contest, Quinnipiac quickly drove down the field on two consecutive possessions to make it a one-score game.

Time ran out, however, and Quinnipiac’s comeback attempt fell short.

With the loss, Quinnipiac falls to 2-1 on the season while Norwich improved its record to 4-1.

The Bobcats next matchup will be in two weeks, when they travel to Utah to face BYU on Saturday, Oct. 11.