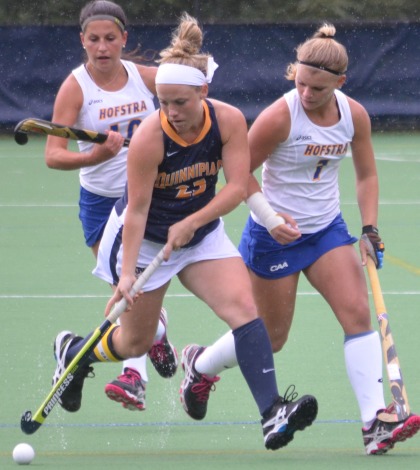 A large part of that was because opposing teams were able to keep the Bobcats’ active scoring leader Danielle Allan at bay.

Today, though, the senior forward looked like the player Quinnipiac has grown accustom to watching over the last four years.

Behind two goals and an assist from Allan, Quinnipiac downed Hofstra 4-2 at the QU Field Hockey Turf Complex.

“[Earlier this year], Danielle was trying to be a forward she isn’t,” Quinnipiac head coach Becca Main said. “She’s just great from the top of the circle. You really saw her do what she does best today, which is coming from the top and cutting down.”

Allan scored the first goal of the game 9:51 into action, tracking down the ball off a rebound and driving it into the back of the net to make it 1-0 Bobcats.

Hofstra would respond, however, scoring two consecutive goals before Quinnipiac midfielder Lea Dietrichs found the back of the net to tie things 2-2 before halftime.

“Lea is someone that wants to bring everyone into the game, she wants to encompass the whole group,” Main said. “Her being a center midfielder for us is just beautiful.”

Then, with 29:02 remaining in the second half, Allan put the Bobcats ahead for good with her second goal of the day to make it 3-2. Lily Shemo added a goal of her own 10 minutes later, rounding out the offensive attack for Quinnipiac.

The four goals scored in today’s game are the most the Bobcats have scored in any game so far this season.

“We realized that it was a problem, and that we all had to start doing our job,” Allan said. “That’s something we focused on in practice, it’s just nice that [the scoring] is coming from all over.”

Quinnipiac goalkeeper Megan Conaboy made eight saves on the day.

With 15:49 remaining, Conaboy sprawled to her left to keep the two-goal lead intact, denying Hofstra any chance at a comeback.

“Hofstra has great shooters,” Main said. “Megan did a great job today, those were quality saves. I thought she did just a wonderful job in terms of what she was supposed to do.”

With the win, Quinnipiac improves to 3-5 on the season. And after beating Vermont and Hofstra this week, the Bobcats look to continue their quality play Sunday, when they travel to Maine for a 12 p.m. game.

“Our goal was to build off of the win against Vermont, and carry that momentum into Sunday’s game against Maine,” Allan said. “I think we did a good job of that today.”