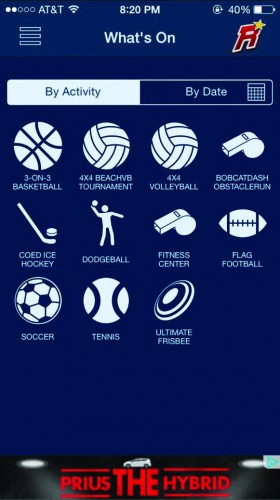 The days of forgetting to show up to your intramural games may be over.

IMLeagues, the website students currently use to get all their intramural information, teamed up with the company Rec*It to bring this app to Quinnipiac and college campuses around the country.

The app allows students to see the upcoming intramural games on their mobile device and put their schedule onto their phone calendar. With the app, students can see which intramural sports the university offers and chat with their teammates.

“You never have an excuse of missing a game,” Medina said. “You can always set the alert.”

Medina said he hopes the app will make it easier for students to know when they have a game, so fewer teams will have to forfeit when not enough teammates show up to play.

“A lot of students are happy that we’re being a lot more aggressive in terms of trying to reduce forfeits,” Medina said. “Because obviously if you sign up a team, you want to play games and when you don’t get to play that game it’s frustrating.”

“I think as they’re able to utilize the app more often, somebody will say ‘I’m not going to be able to make the game on Monday because I have class during that time,’” Medina said. “And now they can let me know in advance and I can shift their game to a different time.”

The national average forfeit percentage for intramural games is about 12 percent, but Medina wants Quinnipiac’s average to be below 10 percent. In years past, the university’s forfeit rate has been as high as 25 percent.

Junior Andrew Kalinowski said his team could not play its last game of flag football because his opponents forfeited.

“It sucks because you get ready to play and then no one shows up,” he said.

But, sophomore Anjali Narayan said she likely will not download the app. She said she prints out her game schedule for her intramural volleyball games. Narayan said she did not mind when her opposing team forfeited their game last year.

“We just got to play by ourselves so that was kind of fun,” she said. “I’m not really intense with it.”

IMLeagues and Rec*It will pay the tuition of one student across the nation who downloads the app.

Freshman Chris Hobbs plans to play 3-on-3 intramural basketball and said he is excited about this app.

“That’s actually really good because I’d be able to find the schedule out,” he said. “It’s really nice to be able to have that on the app because I’m always on my phone.”

The app will also make it easier for captains, Medina said.

“If you’re the captain of your team, your teammates are like ‘hey when’s our next game,’” he said. “Well, now you don’t need to ask the captain. Now you can go right onto the app and see when everything is.”

Kalinowski said his captain always emails his team to tell the players their game schedule.

“But it would just be good to be able to look on an app, just to be able to see when [the games] are,” he said. “I know not every team has a responsible captain that will tell the team when the games are and everything.”

Medina said IMLeagues and Rec*It hope to add additional features in the future, such as the ability to register for a team through the app.

“We’ll hopefully be able to do some customization with it as well,” he said. “We’d love to have Bobcat logos and everything involved there.”