Community comes together to pray for Middle East 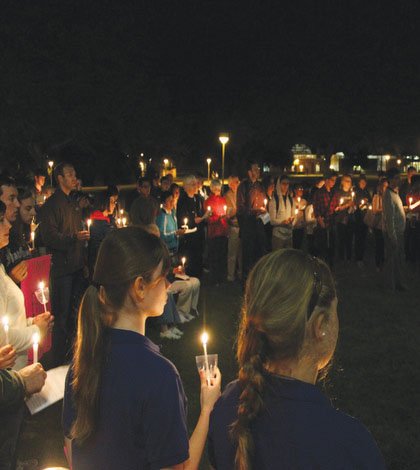 The faint glow of candles could be seen from across the Quad on the night of Sept. 17 as the Quinnipiac community gathered for a candlelight prayer vigil in support of the persecuted churches in the Middle East.

More than 100 members from the university and Hamden community attended the event and participated in the outdoor vigil, which featured readings of the Gospel in English, Coptic, Arabic, Greek and Aramaic.

The event was sponsored by the Department of Cultural and Global Engagement’s Office of Religious Diversity and the Catholic and Protestant Chaplancies.

Quinnipiac’s Catholic Chaplain Father Jordan Lenaghan said it is important for all faiths to pray together for the people in the Middle East who are suppressed religiously.

“Change throughout the world begins always within a single heart,” Father Lenaghan said. “If one heart is changed and one mind opened and educated because of what we do here, then change is possible. Let us be the change we hope for in the world.”

Father Lenaghan said the reason this event was organized was because no one was speaking out about the conflicts in the Middle East on campus.

“Here are these ancient communities that have been in existence for thousands of years who have been destroyed in a matter of weeks and no one was speaking out,” Father Lenaghan said. “If we are going to be true to who we are as the Quinnipiac community we had to say something and as religious leaders this is how we say something.”

Christian churches in the Middle East have been targeted by extreme Islamists and the governments that support them. Many Christian followers were violently executed and torn away from their families, according to ChristianPost.

This has caused many of the ancient Christian societies to leave their homelands or pray in secret away from the public eye.

Local Coptic Orthodox, Greek Orthodox and Assyrian Orthodox clergy were in attendance along with Father Lenaghan and Rabbi Reena Judd.

“I am very close with them considering I am a member of the e-board at the Peter C. Herald House,” Heller said. “I’m Jewish so I have never been to a candlelight vigil, but I thought it was interesting to see a new culture.”

Vice President of Academic Affairs Paul Zeleza welcomed the Quinnipiac community with a speech about how emblematic the vigil is in supporting the values of the university.

“It reflects our commitment to connect in the classroom, campus and community as places of learning and leading for all of us as students, faculty and staff,” Zeleza said. “It also exemplifies our dedication as a university to interfaith, intercultural and international dialogues and understanding.”

Zeleza also said it is important to attend events like this vigil because it helps students understand the complex society they live in, attain cultural awareness and learn about cultivating their humanity.

Freshman Elizabeth Mirasola said she is glad she attended this event.

Mirasola said she hopes students are becoming more aware of what is happening overseas.

“I think it is great that the university was able to hold an event to shed light on what is happening and bring it to everyone’s awareness,” she said. “Even if you aren’t religious things like this are great to attend in a humanitarian aspect.”

Sophomore Connor Voss said he had no idea that the vigil was being held, but had an idea about what was going on in the Middle East.

“I’m of the opinion that all religions should be protected and respected no matter what the case unless they are threatening and suppressing others,” Voss said. “I feel like not many people knew about the vigil because it wasn’t heavily advertised but the ones who did were allowed to express themselves freely, so that’s all that matters.”

Father Lenaghan said this event is not just a human rights action, but a community building experience and a cultural activity as well.

“Students seemed very attentive, aware and there was a high degree of participation,” Father Lenaghan said. “I hope that students had a great learning experience from the service.”

First year graduate student and member of the leadership board for the Catholic Chaplain Michaela Belanger said she was happy with the turnout for the vigil.

Belanger said Father Lenaghan’s goal was to expose students to different traditions and languages to bring more awareness to the Middle East.

“I hope that when students who attended this event think of the strife in the Middle East that they are able to reflect on that and keep them in their prayers,” Belanger said.