Pecknold: defense ‘going to be the strength’ 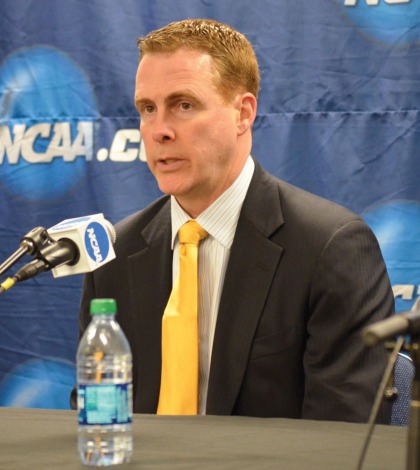 Though the team is young, Quinnipiac head coach Rand Pecknold still sees one key strength in this year’s squad: its defense.

“We really like our D-core this season,” Pecknold said, via conference call Tuesday morning. “They’re going to be significantly better. They’re bigger, they’re stronger than they were [last season].”

Pecknold added that senior Dan Federico and sophomores Connor Clifton and Devon Toews will anchor the back end heading into the season. Alex Barron and transfer Justin Ogosta will also make an impact, giving Pecknold five solid defenseman to work with for the first three pairs.

“And we’ll have some depth, too,” Pecknold said. “We’ll be able to find a sixth defenseman to go with those five. It’s definitely going to be the strength of our team.”

On the offensive side, Pecknold envisions Matthew Peca and Sam Anas working on the first line together to open the season.

Peca, who finished with 38 points last year, was selected as one of the three forwards on the Preseason All-ECAC team.

Anas won the NCAA’s National Rookie of the Year Award in 2013-14 after collecting a team-high 43 points. And after playing on the Bobcats’ first line with Connor and Kellen Jones a season ago, Pecknold says that the second-year wing will have an adjustment to make this year.

“It was one of the best lines in all of college hockey last year, probably second behind the Gaudreau line at Boston College,” Pecknold said. “But [Anas is] a great player, and there’s a nice line of guys on my team who want to play with him and Peca.”

Pecknold added that Anas put on 11-12 pounds this summer, and had a great camp with the Montreal Canadiens.

“I think he’ll be a better player this year,” Pecknold said. “I don’t know if he’ll have as many points, but I think he’ll round out his game a little bit. And he’s certainly someone we’re   going to count on heavily.”

The Bobcats were picked to finish fifth overall in the the ECAC Men’s Ice Hockey Coaches’ Poll on Tuesday, behind Colgate, Union, Cornell and Yale.

The ECAC has produced Division I’s National Champion in each of the last two seasons, and the national runner-up when Quinnipiac was defeated by Yale in 2012-13.

“Seven or eight years ago I think we probably weren’t getting the recognition we deserved,” Pecknold said. “Now that we’re putting teams in the Frozen Four, we are getting a better chunk of national recognition, from both the media and the fans.”

And the way Pecknold sees it, the ECAC is as good as any conference in the nation. In fact, the conference might be better.

“I think our league is as good as any, if not the best,” Pecknold said.