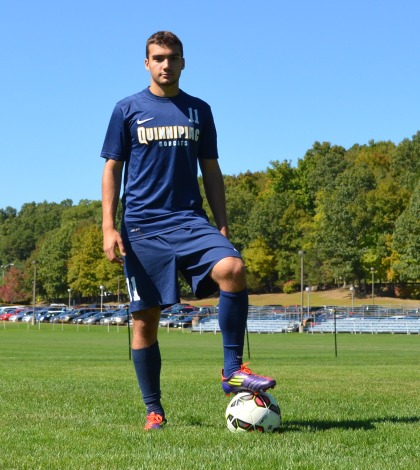 Last November, James Greco was standing on the turf of Ben Cohen Field as he and the Rider University men’s soccer team readied to take on Quinnipiac in a Metro Atlantic Athletic Conference match-up.

It was a game that would end in a 1-0 victory for the Bobcats, the only goal coming off the foot of Simon Hinde in the 105th minute. The double overtime contest would remain in the back of Greco’s mind for the rest of the season.

For more than one reason.

Greco, now a transfer student-athlete for the Quinnipiac men’s soccer program, initially heard about Quinnipiac through a friend who attended the university. Soccer, however, was not the only ambition he had in moving to Hamden this fall.

“I had a friend who went here and she really liked the school,” Greco said. “Rider is mostly just a commuter school so not a lot of people stay on campus, there’s not a lot of things to do. Academically, there’s a better program here. I’m a finance major and they have the specific program where I can go right out of college to take my CFP exam.”

Greco’s father, Rosario, is already a certified financial planner, which is what Greco is looking to do out of college

In the meantime, he has other goals in mind, like helping the men’s soccer team reach the NCAA Tournament for the second straight season.

“It definitely helped because you never want to go somewhere that is worse,” Greco said. “You want to strive to be better, and this is definitely a better move all-around.”

Greco did his homework, researching the positives and negatives of what coming to Quinnipiac would mean.

The coaches of the men’s soccer team had some homework to do, too.

“Transfers are interesting because you have to really make sure your not getting someone else’s problems,” head coach Eric Da Costa said. “When we look at a transfer, the first thing you look for is a player with experience. So once we realized it was a transfer on good terms, then we were definitely very interested in learning more about [Greco].”

Da Costa said a significant factor in bringing Greco across the conference and into the Quinnipiac locker room was understanding the junior’s ability. The forward plays well against conference opponents, Da Costa claims, which is something Quinnipiac saw first-hand in Greco’s first two years at Rider.

“Once we get into league play James will adjust a lot quicker, just to the style of play in the league,” Da Costa said. “James is going to feel as if he was at Rider, just wearing a different jersey.”

Greco says he already feels at home. It is one of the many reasons he loves being a Bobcat.

“Our togetherness as a group, obviously you spend hours and hours together,” Greco said. “At practice, after practice and everyone on the team is just a jokester in their own way. It’s just funny to be around all of them.”

Heading into its seventh regular season match of the season on Friday against Yale, the Bobcats are still looking to find offensive consistency. Quinnipiac has scored six goals so far this season, and has been shut out five times if you include Aug. 17’s exhibition against Connecticut.

“I think if you look at the beginning, where we started out, we were just trying to find our identity,” Greco said. “The last few games you can definitely see that, going forward, we’re a lot better and we’ve created a lot of chances. We just have to finish them.”

Before playing Columbia University at the QU Soccer Field this Saturday, Greco was already on his way to becoming an influential part of Quinnipiac’s offense. He recorded eight shots in a three-game span and assisted on two goals against Providence on Sept. 7.

“He plays in the engine room, right in the middle of the field,” Da Costa said. “A player in there is constantly involved on both sides of the ball. But he’s a technical player and he has very good vision.”

Greco then built on his success by scoring his first goal of the season against Columbia last Saturday, as the Bobcats pulled off a 2-0 victory.

In the 73rd minute of the contest, Greco let loose on a staggering shot from just inside the penalty box. The ball hit off both goal posts and rolled into the back of the net.

“When he has the ball he does very good things with it,” Da Costa said. “He’s been a big part of our slow growth of offense [this season].”

It wasn’t the game-winning goal,  but it helped determine the fate of Quinnipiac’s second win.

“We’re confident, but we need to improve as a team,” Greco said. “There’s a lot of things to improve on. We look to do that during the season.”