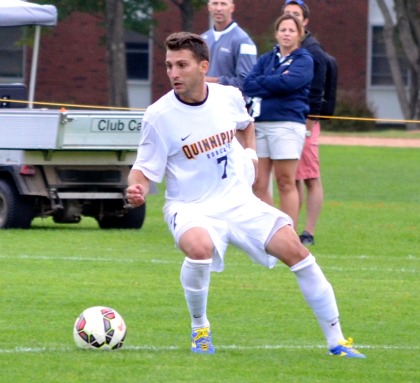 Behind a four-save shutout from senior goalkeeper Borja Angoitia, the Quinnipiac men’s soccer won its second game of the season on Saturday afternoon, downing Columbia 2-0 at the QU Soccer Field.

The shutout is Angoitia’s second in three games, and the 18th of his career at Quinnipiac.

“The game was evenly played in the first half,” Quinnipiac head coach Eric Da Costa said. “We were being challenged in the midfield. We made a few adjustments and tweaks there.”

The first goal of the game came in the 58th minute when freshman midfielder Max Rothenbucher fired a shot from outside the box which appeared to hit Columbia goalkeeper Kyle Jackson’s right hand and go in. The goal was assisted by fellow freshman midfielder John-John Diaz.

The Bobcats second goal of the match came in the 73rd minute when junior midfielder James Greco scored from inside the box with an assist from senior midfielder Raphael Carvalho.

“A lot if it was nonsense, emotional play,” Da Costa said. “I thought our boys handled it pretty well, though.”

Even though they lost, the Lions outshot Quinnipiac for the entire match 10-6. In the losing effort, junior goalkeeper Kyle Jackson had two saves.

After the match, Bobcats head coach Eric Da Costa said that the keys to his team’s victory were “team mentality, spirit, and consistency.”

With the win, Quinnipiac moves to 2-4-1 on the season. The Bobcats play against another Ivy League opponent on Friday when they face Yale at home.