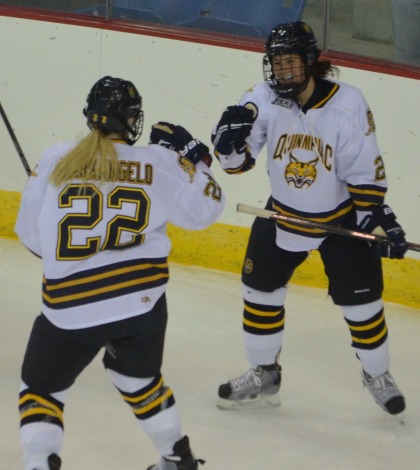 Goals were scored early and often in the first period for the Bobcats, who ready for their Oct. 3 opener.

Sophomore, Meghan Turner scored the first of six goals in the period for the Bobcats 5:52 into the game. Taylar Cianfarano and Olivia Agostinelli each answered with goals of their own less than two minutes after Turner’s.

“We have talent, but talent won’t get you anywhere unless everyone’s committed to the same system,” Seeley said. “If we’re going to be as successful as our talent dictates, we [must focus] on small details. But, overall, we are pretty happy with how we played.”

Quinnipiac continued its intense offensive attack, adding to its lead with a goal from co-Captain Erica Uden Johannson and a pair of goals from Nicole Connery to wrap up the first period.

“Today’s game was fun,” Connery said. “We skated hard, getting ourselves ready for big games. We are all expecting to get to the championship. We are going to climb the mountain to get there.”

Nicole Kosta and Shiann Darkangelo also contributed to the scoring. Kosta increased the Bobcat’s lead to seven, scoring the only goal in the second period with 3:56 left. Darkangelo recorded an assist on Connery’s first goal and tallied her own goal in the third period.

The Bobcats had 48 shots on target to Team China’s seven.

Quinnipiac did, however, go 0-4 in power-play opportunities on the afternoon.

“There are no concerns,” Seeley said. “We forced [shots] and hung onto the puck too much, but we should be more successful on the power play this year than last year. I think we have three lines that can score on a regular basis.”

The Bobcats will hold their annual Blue vs. Gold scrimmage in their final exhibition game next Saturday at High Point Solutions Arena.