A new student barber in town

Many students unwind and relax over the summer in preparation for the start of a new school year. For sophomore finance major Saul Ellison, it was a chance to learn how to cut hair.

It all started during Ellison’s freshman year when he needed a haircut and could not find a decent barber near campus.
[media-credit name=”Miki McKinley” align=”alignright” width=”300″] 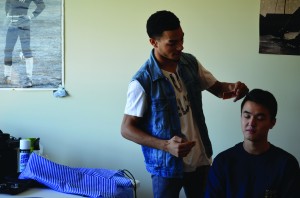 [/media-credit]
“At first I tried a local barber but he ended up not cutting my hair the way I liked it,” Ellison said. “I decided to buy my own set of clippers and cut it myself.”

This inspired Ellison to take classes over the summer at a barbering school in New York where he received his license as a certified barber.

“When I came back to school [this year] I was a pro at cutting hair,” Ellison said. “I learned a lot about cutting different types of hair in my classes and how to use the tools.”

Ellison has given 42 students haircuts on campus from his dorm room since the beginning of the school year. He said he has made more than $300 and broke even on his equipment almost immediately after starting on campus.

Ellison said he always holds on to the advice his own barber gave him.

“He always told me, ‘If you know how to draw, you know how to cut hair,’” Ellison said. “Cutting hair is an art and you need to be very tedious about it. You can’t rush through it, you have to take your time and make sure your customer is happy.”

Sophomore Chad De Gannes said if he did not know Ellison before he cut his hair, he would have assumed he had been a professional barber for years.

“I recently recommended my roommates and they all love their hair too,” De Gannes said. “He’s a cool guy and he knows what he is doing. My freshman year I went to Supercuts and they didn’t do as good of a good job, I would much rather go to Saul.”

Ellison charges an average of $10 to $15 per haircut depending on the style of the haircut. He has yet to charge over $20 and does not plan to.

“I understand that we are all college students and we don’t have a lot of money,” Ellison said. “But normally guys will give me $20 anyway because they are so happy with their hair. That is something that is very gratifying to me because it means I am doing a good job.”
[media-credit name=”Miki McKinley” align=”alignright” width=”300″] 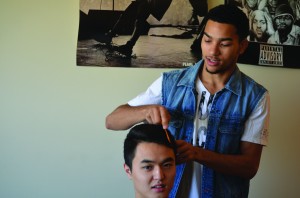 Freshman JonCarlo DeFeudis saw Ellison’s advertisement on Facebook. He thought it would be easier than going off campus for a haircut.

“He was very professional and he is a really good barber,” Defeudis said. “At first I was unsure and did not know if he would be good at it, but he really took the time to make sure my hair was exactly how I wanted it.”

Freshman Andre Gentles said he was recommended by a friend to get a haircut from Ellison.

“He made me comfortable and treated me like a friend as opposed to a customer and I really appreciated that,” Gentles said. “He’s very professional and I have been back there multiple times.”

Ellison said most of his customers have come from recommendations, which has helped his business expand on campus.

“After a while customers would go back and tell their friends about me and how much they loved what I did for them, so my customer base on campus expanded from there,” Ellison said.

Ellison’s customer base is mostly male, but he plans to take classes in cosmetology soon in order to cut female hair as well.

“Cutting a girl’s hair is way different than cutting a guy’s hair,” Ellison said. “But I definitely want to learn so that way I can expand my business even more on campus.”

Ellison recently had his first female customer who saw his work on one of the Facebook pages. Freshman Gennie Muniz wanted a haircut similar to the haircuts he was giving to his male customers.

“I’m taking a leap of faith trusting Saul with my hair since he is only used to cutting guy’s hair,” she said. “It’s a big transformation but I am so excited to help him learn.”

Freshman Jayson Buford said he was happy with how Ellison cut his hair.

“He was very meticulous which was really good, especially for a student barber,” Buford said. “[Ellison] told me the first time he cuts hair he takes longer to finish cutting it because he wants to see what my hair type is for the next time.”

Ellison said he has easily used his financing skills to help his business on campus.

“Most people wouldn’t think a finance major would be cutting hair,” Ellison said. “You generally think they are good with numbers. The way I have tied that into my major is by using business techniques such as giving my customers incentives to come back.”

Ellison said the more times a customer returns to him for haircuts the lower he will drop the price. He plans to create specials where after a certain number of haircuts the next one would be free.

Ellison has also helped some of his friends promote their businesses as well, such as Sophomore Victoria Saha who is now promoting eye threading on campus.

Ellison is excited to continue working with customers on campus. He said he is happy he took classes over the summer because it will help him for his future.

“If you can learn something new and put your mind into learning a trade, you will never forget it and you will have that skill for the rest of your life,” Ellison said.