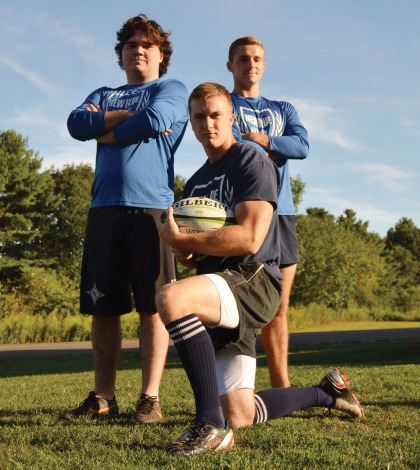 The New Blue Rugby team makes a trip to Hamden Middle School Field three days a week for practice. Players carpool with one another to the field from the Mount Carmel campus, one car after another in a seemingly endless line.

And this year, the club’s tenth anniversary season, it takes more cars to get to and from practice than ever before.

With roughly 50 total players on its roster, New Blue is enjoying a high point in the team’s growth throughout time.

It’s a culmination of what they’ve worked toward for years.

“It’s nice to see as a senior,” said James Guido, one of the team’s three captains. “The large numbers really make all of the current members and the alumni happy. It’s amazing.”

And with bigger numbers than ever before, the club rugby team has one simple goal for 2014 – to win.

Coming off a winless season in 2013, they’re determined to reach such goals.

“We want to win. That’s what we’re here for,” captain Evan MacDonald said. “We want to make the playoffs and bounce back from last season, and we’re really focused on reaching those goals. We’ll do whatever it takes.”

Having such a large roster will certainly help in trying to reach those aspirations, according to Liam Doran, another captain and four-year member of the team.

“Last year our weakness was that we couldn’t keep up,” Doran said. “This year we’ve been working on a lot of conditioning. It’s a hard working group of guys.”

Doran added that two of the team’s veterans were studying abroad last year, but are now back and ready to contribute.

Guido thinks the team has potential to be one of the strongest the program has ever seen.

New Blue devotes two days a week strictly to conditioning drills on campus, then begins the other three practices getting in shape for the Sept. 20 opener against Worcester Polytechnic Institute at home.

They team’s veterans also have to teach many of the new players the basics of rugby, which can be a struggle at times in itself.

Guido knows what it’s like to struggle with picking up a brand new sport. He joined New Blue as a freshman, having never touched a rugby ball in his life beforehand.

“We have to try and get in shape for the season, but also try to teach everyone the sport, too. It’s an interesting dynamic to balance,” Guido said.

So members of the team implore others to put in work during their own time, away from practices. The team’s new players watch videos, read about the sport and ask some of the club’s former players about different positions and scenarios.

“We’re self motivated,” Guido said. “It’s really rewarding to see everyone work so hard for a common goal. We work for one another.”

In practice, however, it’s a whole different story. The first thing the newcomers are taught about rugby is the art of a proper hit.

“Hitting is different in rugby, It’s all about getting low, protecting yourself,” MacDonald said. You don’t wear pads, so we want to make sure everyone is safe.”

Formed in 1990 as just a club team, the rugby squad made the name New Blue official in 2004. The team’s captains organize practice venues, the team’s schedule, and various fundraising opportunities around the area among many other responsibilities.

“It’s a lot of planning,” Doran said. “We don’t have a coach, so everything you see is done through us. It’s kind of awesome. It’s not really something you see everyday.”

The team plans on honoring its alumni in a special way this year, purchasing them shirts and wristbands among  various other gifts. The players on the current squad want to show their appreciation for everything the program’s former players have done.

The alumni also help carry on the tradition of New Blue rugby to current students. Doran says he started playing because his brother, who graduated in 2009, used to be a captain.

“We’re always taking care of one another, looking out for every player who’s ever put on the New Blue uniform,” MacDonald said. “When we call each other brothers we mean it.”

“My best memories are the laughs,” Guido said. “At the end of the day we’re playing a competitive sport with a lot of hits, but we make it fun. That’s what it’s all about.”

To this day, Doran is thankful for his decision to join the squad four years ago.

“We all have our houses we go home to, but we all end up seeing each other every day, every weekend,” Doran said. “We’re there for one another no matter what.”

The team has a six-game schedule, and hopes to once again hoist the New England Wise Collegiate Rugby Conference championship as it did back in 2012.

In addition to playing its home opener Sept. 20, the team plays at home Oct. 4 against Central Connecticut State and Oct. 25 against Westfield State. The three away games New Blue will partake in are against Western Connecticut State, Springfield College and Hartford University

All along, they strive to become affiliated with Quinnipiac University in the near future.