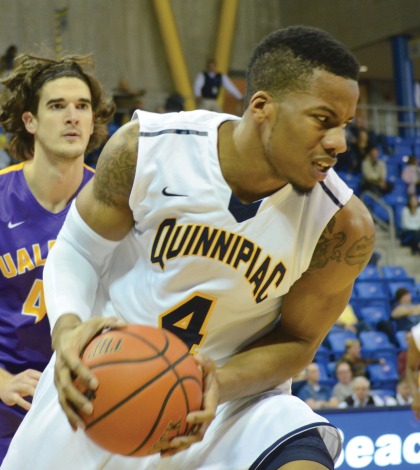 Azotam, Quinnipiac’s all-time career leader in rebounds, will join Marin Peixegalego, a member of the Spanish LEB Silver League. Shannon, who transferred to Quinnipiac for his final season of Division I eligibility, will play for KB Besa Peja in the Republic of Kosovo.

“On behalf of the entire Quinnipiac men’s basketball program, I’d like to congratulate Ike Azotam and Umar Shannon on the start of their professional careers,” Quinnipiac head coach Tom Moore said. “We are all very happy and excited for Ike, Umar, and their families as they start the next chapter in their lives.”

“Both Ike and Umar have worked very hard to prepare themselves for this moment and I’m confident this will be the beginning of long and successful careers for them both.”

Azotam, a native of Boston, grabbed 1,043 in his four-year career with the Bobcats.

He averaged 16.2 points and 10.2 rebounds per game during his senior season, personal career highs in the both categories. He ranked 14th in the nation in rebounding, and his 44 double-doubles rank first in program history.

Azotam put up 13.5 points and 7.9 rebounds during his junior year, 15.8 points and 9.5 rebounds his sophomore season and 5.0 and 5.3 in his first season with the Bobcats. He shot over 50 percent from the field for his career, a high number at the Division I level.

Marin Peixegalego, who plays a 27-game season, is a member of the second division of the Spanish Basketball League system.

Both Azotam and Shannon will begin action with their professional team’s in early October, with the regular season stretching through the end of April 2015.