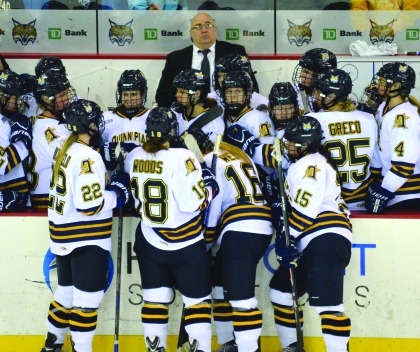 Kosta, a junior forward, was injured during the 2013-14 season, opting to redshirt. Uden Johansson left the Bobcats last season to prepare for the Winter Olympics to play for her native country Sweden.

“Adding them two back to the roster is like adding two monster recruits,” Seeley said.

“It’s the time for enthusiasm, and we definitely have it here,” Seeley said.

“We don’t put too much emphasis on ranking, the coaches never get it right where we end up,” Seeley said.

Going into his seventh season at Quinnipiac, Seeley led Quinnipiac to a 22-6-9 record last season. USCHO.com ranked the Bobcats as high as No. 5; a program first.

Quinnipiac will be without all-time scoring leader Kelly Babstock, who graduated last spring. In her four seasons as a Bobcat, Babstock put up 203 points, including 95 goals.

Babstock’s scoring will be missed, but Seeley thinks that some returning players can fill those shoes, including Nicole Kosta and Erica Uden Johansson.

“Kelly helped this program get recognition, but adding those two (Costa and Erica Uden Johansson) will cover the point production,” Seeley said. “We aren’t going into this season with a rest in peace sign cause Kelly left, I think we are stronger than ever.”

Darkangelo finished second on the roster in scoring, points, and assists behind Babstock. This summer, Darkangelo worked at the US Hockey Development Camp and worked on her skills.

“She was consistent for us all of last year and she looks better than ever,” Seeley said.

Fritz-Ward had nine goals and six assists, Connery had six goals and 13 assists and Roesler had three scores and 14 assists in 2013-14.

The Bobcats play the Chinese National team on Saturday at the TD Bank Sports Center, with puck drop slated for 2 p.m.

Quinnipiac’s annual Blue/Gold scrimmage will take place Sept. 27 at the TD Bank Sports Center at 4 p.m., while its first game of the regular season is Oct. 3 against Connecticut at home.