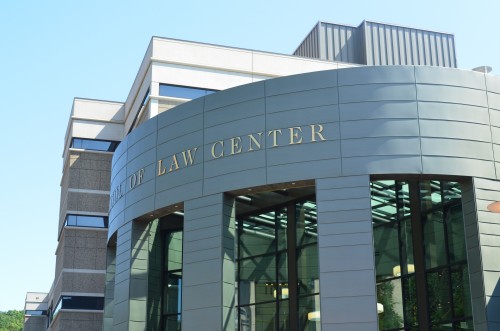 A handful of students in the freshman class could be the first group of students to graduate in six years with a law degree from the university.

President John Lahey came up with the idea to develop a new program where select students can complete both their undergraduate and law degree in six years instead of seven, according to chair of the legal studies department Jill Martin.

The students will take 105 credits by the conclusion of their third year, which is about five more classes than the average student completes by the end of their junior year, Martin said.

Students will most likely have to take an additional few courses over the summer leading into the fifth year.

For now, 15 freshmen in the College of Arts and Sciences were invited to join the program based on their interest in pre-law, their high school GPA and their SAT scores. Martin said the department is in the process of contacting the students to see if they want to accept the invitation.

Martin said six-year law school programs have been around for years. But the university’s decision to adopt this program at Quinnipiac reflects a nationwide discussion on changes to law school education.

“There’s a lot of discussion about what law school education should be looking like,” she said. “And so this was an idea that would encourage students to come to Quinnipiac because they have the option of doing the six-year program.”

Across the country, the number of students attending law school and taking the LSTATs has decreased, Martin said.

Martin said this program will get students acquainted with the law school and its faculty, so they will want to finish their degree at this university.

Law school faculty will hopefully be involved in the students’ classes and attend events for the students in the program, Associate Professor of Legal Studies Jessica Hynes said.

“They will have that ability to have intellectual discussions with the law faculty,” Hynes said.

Martin said there are many benefits to the program. For example, students are able to live on campus for their first four years. Students will also be able to keep their undergraduate scholarships throughout the six years. If the student scores a 155 or above on their LSTATs, he or she could get an additional scholarship.

The program also saves students time and money because they do not have to pay a seventh year of tuition, Hynes said.

“They also do have a somewhat automatic admission into law school,” Hynes said. “They have to maintain certain requirements, but other than that they don’t have to go through the regular admissions process.”

However, freshmen who join this program will not be forced to go to the Quinnipiac law school. If the students have enough credits to graduate after three years, they can get their undergraduate degree and choose to attend a different law school. Students are also free to change their majors.

“We realize that people who come in as freshmen change their mind about things and that’s totally expected,” Martin said.