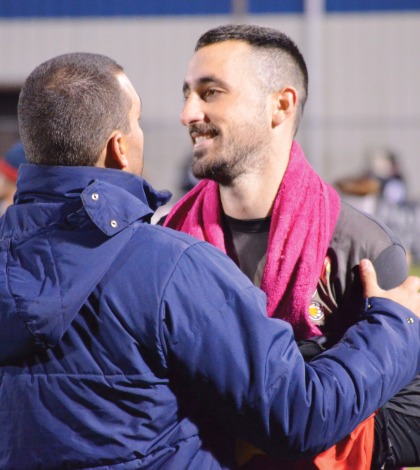 It’s been an unbelievable ride for Borja Angoitia.

So unbelievable, in fact, that the senior goalkeeper from Bilbao, Spain has already etched his mark into the proverbial stone that contains Quinnipiac’s greatest athletes.

And his journey isn’t over just yet.

In fact, Quinnipiac needs him to play at a high level, perhaps higher than ever before.

Angoitia was at the center of men’s soccer team’s historical run to the NCAA Tournament – a first in program history.

He enters 2014 as the reigning Metro Atlantic Athletic Conference Goalkeeper of the Year, after posting a .70 goals-against average with an 84.3 percent save percentage.

Head coach Eric Da Costa even chose to let him take penalty kicks in the postseason – a rarity for goalkeepers.

But Angoitia isn’t one for introspection. After all, stumbling across such a thing in an athlete of his caliber is a rarity.

Instead, he’s focused on improving each and every day. Things are pretty simple, the way he sees it.

He wants to win.

“All the awards and stats mean nothing,” Angoitia said, prior to kicking off his senior season. “I don’t care if we win 10-9 or 9-0, as long as we win I’m satisfied.”

Angoitia, of course, has never come close to surrendering nine goals in a game. In fact, he’s been fairly reliable since his earliest days in Hamden.

He held a 6-8 record during his freshman season, but his 1.73 goals-against average spoke for itself.

Then, during his sophomore season, Angoitia broke out. He posted a 1.12 goals-against average with five shutouts, saved 78.8 percent of the shots that went his way, and helped lead the Bobcats to an NEC regular season championship.

It was the beginning of one of the most illustrious careers for a Quinnipiac athlete.

In the four year’s since Angoitia has arrived, the men’s soccer team has turned itself into a powerhouse in the Northeast region.

So what will happen once the senior goalkeeper graduates at the end of this season?

Nobody knows for sure, but the Bobcats aren’t looking that far ahead.

They’re focused on winning this season, with Angoitia between the crossbars. He anchors a veteran-laden defense that the Bobcats have relied on heavily in the past.

Stevenson Hawkey, Erik Panzer, Tobias Esche and Ashton Pett, who all played a big role in the 2013 championship-caliber team, return in front of him.

It’s a group that has succeeded at the highest of levels. But no team can avoid struggling at one point or another, and the Bobcats are no exception.

While they try to find a rhythm on offense, the experienced defense needs to hold things together. That defense starts with Angoitia.

When the senior goalkeeper gives up more than one goal, Quinnipiac loses. But when he held Boston College to just one score Sunday, the Bobcats earned their first victory of the year.

Last season, Quinnipiac was 9-2-6 when Angoitia let up one goal or less, and 0-3-1 in game’s where he allowed two or more goals.

Da Costa’s team is defensive-driven, which he admitted prior to the season’s start.

This is why Angoitia is the team’s x-factor if they hope to return to the postseason, and possibly play in another national tournament.

Until then, Da Costa’s squad will have to continue finidng offensive output, which they will. Building chemistry in the early weeks of the season is crucial.

The goal is to play your best soccer at the end of the season, not at the beggining.

And if Angoitia is playing at the high level we’ve come to expect, Quinnipiac will be just fine.