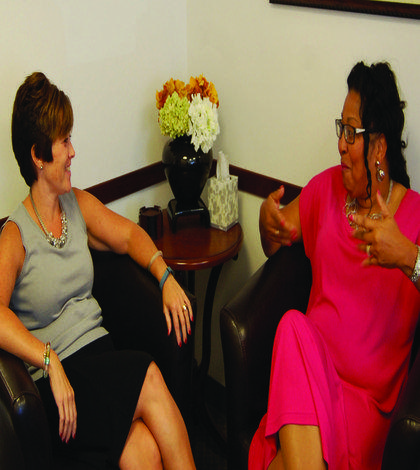 The university has been without a vice president for student affairs for more than a year now, but two administrators have taken on the responsibilities of the position.

Drucker said there was already a natural split in her and Porter’s positions, so it was fairly simple to know how to break up the work.

“We’ve both been familiar with all of this, some stuff we’ve been assisting with for years, but the difference is the responsibility is solely ours,” Drucker said.

Both Porter and Drucker work on the administrative tasks of the position, such as the budget, strategic planning and meetings with staff and administrators.

“The main thing we do is we stay in constant communication, which is great because our offices are literally, what 50 feet away from one another,” Porter said.

Drucker and Porter both praised their staff and said their colleagues make the job easier. Porter said she loves what she does, so her job does not feel chaotic.

“At the end of the day, I love what I do,” she said. “I love being able to connect with students and to talk with students. You say, ‘How do you balance it?’ You just do it and I think when you love what you’re doing it doesn’t feel like it’s a big juggling act, so to speak.”

The university intended to hire a new vice president for student affairs for this academic year, but Executive Vice President and Provost Mark Thompson wanted to find a more diverse, higher-quality group of candidates to select from. (See cover)

Thompson said he was not worried about the position remaining open for another year because he knew Drucker and Porter were doing a good job.

“I have a lot of confidence in them,” he said. “I don’t think we were harmed. I think, again, sometimes it’s best to take a pass if you’re not satisfied necessarily. I mean, I could have accepted candidates I thought were okay, but I just didn’t think that was in the best interest of our students.”

In the meantime, Drucker said she and Porter will continue to serve the students.

“That’s what we’re here to do,” Drucker said. “It’ll certainly be nice to have a vice president, but in the meantime I think Cindy and I feel very confident about the service that we can provide and the responsibility for the division that we have.”

Still, Drucker said it is important the university to have someone in the vice president for student affairs position.

“For me [the position is] the voice of the students,” she said. “And not that we’re not lending voice to that now in our capacity…but I think it can be strengthened with a vice president versus two associate vice presidents serving that role.”