Faces of the Farmer’s Market 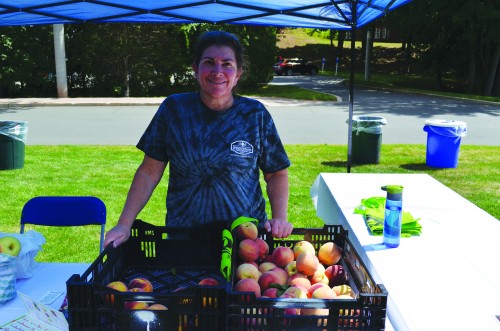 Many students have visited Quinnipiac’s Farmer’s Market before, but few have really tried to get to know the faces that help make the market so unique. Try to get to know them because they will be there every Wednesday from 10 a.m. to 2 p.m. throughout September.

Let’s face it; Chartwells doesn’t always appeal to students.There will be plenty of times where students will feel like they need a cleanse from cafeteria food for at least a night or two. The good news is, students can get that desired quick cleanse just around the corner from QU at Thyme & Season.

Thyme & Season carries organic, non-GMO, gluten free, as well as vegan products. It’s only a few minutes away on 3040 Whitney Avenue in Hamden. But if you don’t have a car on campus, Thyme & Season will be at the market with their most popular products.

Mollie Detmers was there helping represent Thyme & Season last Wednesday and said the business has been coming to the Farmer’s Market for several years.They were invited to be vendors on campus so students could have a healthier alternative to other cafeteria food options, according to Detmers.

“We want people to know us,” Detmers said. “Students want something quick and easy. We want students to know there are healthy snacks here.”

Thyme & Season sells local produce, organic meat and poultry, hormone-free dairy, fish and healthy snacks in their store, according to their website. But when the store comes to the Farmer’s Market at Quinnipiac, its best-seller is its diamond season salsa, Detmers says.

Overall, Thyme & Season keeps coming back to QU to see the different people.

“It’s great to see other local vendors,” Detmers said. “A lot of people have stuff from our store and we want students to see there’s easy snack options out there.”

It’s the third week into school and this is probably around the time when many students begin to miss their parent’s home cooking, especially their baking. It’s a good thing fresh-baked goods is Meriano’s specialty.

Based in Madison, Conn., this bakery has been coming to Quinnipiac for the past couple of years. The family-owned and family-operated company started business in 1988, and even though the commute is approximately a 30-minute drive, Meriano’s keeps coming back.

Ashley Paczowski represented Meriano’s at the Farmer’s Market last Wednesday, although she admits it was only her second time working at the market. Despite this, she knew off the bat what items were students’ favorites.

“The stuffed bread and our cannolis tend to be the most popular,” Paczowski said. “Especially the cannoli truck.”

Their cannoli truck has only been around for about a year, but it has proven to be quite popular for Meriano’s whenever they come to Quinnipiac. Now any student with Italian heritage–or anyone who just loves cannolis–can get cannolis the way his or her family would make it right here on campus.

Meriano’s likes going to the the market, Paczowski said, and they have family members who work at Quinnipiac, which makes the travel even more worthwhile.

Peaches, pears, plums and apples. No matter what type of fruit you’re looking for, Drazen Orchards will likely have it–if not at the Farmer’s Market, then at their home location in Cheshire, Conn.

Drazen Orchards has been participating in QU’s Farmer’s Market ever since the market began years ago and the tradition has lived on.

Lisa Drazen will continue to represent Drazen Orchards every Wednesday this month. The orchard has been in business since 1951 and is still going strong.

Drazen says she likes coming to Quinnipiac for the Farmer’s Market.

“We get to talk about fruit and we’re so passionate about what we grow,” Drazen said. “Also it’s great to be outside. It never rains.”

With Drazen Orchards on campus, students will have easy access to fresh local produce every Wednesday. Each week the orchard will bring something different, depending on what’s in season, Drazen says.

“Peach season will last another two weeks and we have 17 varieties of apples,” Drazen said.

In addition to a wide variety of produce, Drazen encourages students to visit the actual orchard itself.

“We love when big QU groups come out to visit [at Drazen Orchards],” Drazen said. “Best Buddies has come out for pick-your-own and so has QU honors.”

It is only about a 10-minute drive from the Mount Carmel campus and there are wagon rides in addition to the opportunity to pick your own fruit.