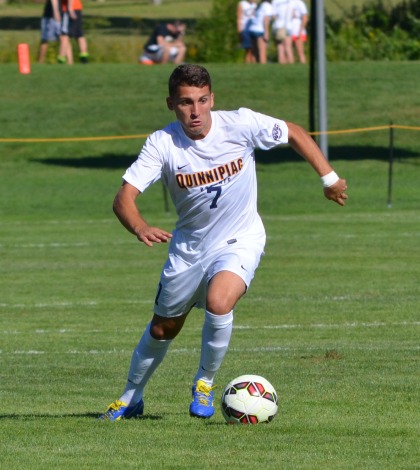 Quinnipiac scored three times on Sunday en route to winning its first game of the season against the Friars, coming away with a 3-1 victory at the QU Soccer Field.

“We were definitely focusing on the offensive part of things,” Quinnipiac head coach Eric Da Costa said. “If you’re not creating chances, then you’re concerned as a coach.”

Quinnipiac struck first 3:31 into the game. Freshman midfielder Shaquille Huggins put the ball in the back of the net off a free kick, making it 1-0.

“We wanted to continue to believe in what we’re doing, continue to improve and hopefully get some results on the way,” Da Costa said.

Almost twenty minutes in, Providence responded with a goal of its own to knot up the score 1-1. Dominik Machado scored the unassisted goal at 17:34, as he was able to put home a rebound off the far post.

Quinnipiac would respond, however, adding another goal less than five minutes later. Max Rothenbuecher set up Machel Baker for the score, giving the Bobcats a 2-1 advantage.

The Bobcats were able to bury their third goal with about ten minutes gone by in the second half. Sophomore James Doig blasted his first-career score past Providence keeper Keasel Broome, making it 3-1.

Broome had three saves on the day, while Quinnipiac goalkeeper Borja Angoitia had one.

“(We have to) continue to be clean, and keep clean sheets,” Da Costa said. “I really like our spirit today. The boys really played for each other today.”

With the win, Quinnipiac moves to 1-3 on the season. The Bobcats will take the field again Saturday, as they travel to West Point to face Army at 7 p.m.