Quinnipiac has a zero tolerance policy when it comes to medical marijuana, despite the drug’s approval for medicinal use in the state of Connecticut in 2012.

“[The university] does not permit students to use or possess marijuana on campus, even if they have a prescription,” Associate Dean of Student Affairs Seann Kalagher said.
[media-credit name=”Wikimedia commons ” align=”alignright” width=”268″] 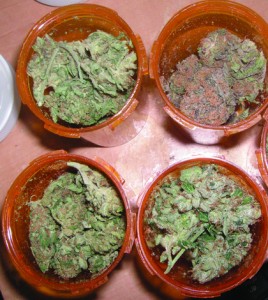 [/media-credit]
The federal government has played its own part in keeping medical marijuana off college campuses.

According to Kalagher, The Drug Free Schools and Communities Act prohibits the university from permitting the use of illegal drugs on campus, even if permitted by state law.

Kalagher said marijuana is classified as an illegal drug by the federal government. This means any allowance of marijuana use on campus, medical or otherwise, may jeopardize the university’s access to federal funding.

A recent Connecticut law has designated colleges and universities to prohibit the use of medical marijuana. As such, any marijuana use on Quinnipiac’s campus is a violation of federal law, state law and university policy. Any use will be referred to the student conduct process.

“In accordance with federal law, the University does not permit the possession, use or distribution of marijuana,” the student handbook states. “As such, students in possession of medical marijuana prescriptions [issued in Connecticut or any other state] are not permitted to use or possess marijuana on University property.”

The University of New Haven will also not adjust its policy when it comes to medical marijuana users, according to Chief of Police Mark DeLieto.

“If it’s allowed on campus, people will start taking advantage of it,” Reimer said. “They would be selling it, giving it to their friends and smoking it when they aren’t supposed to be.”

The first medical marijuana dispensary has yet to receive its first shipment of the cannabis. Staff members have begun consulting with patients, according to the Connecticut Post.

Connecticut has one medical marijuana dispensary located 53 minutes away in South Windsor.

Five additional locations have received permission to open from the state Department of Consumer Protection, according to the Connecticut Post. The closest to the university will be in Branford, which is about a 20-minute drive according to Google Maps. The state has plans to open a facility in Bristol, which is approximately a 40-minute drive.

Unlike California, where residents can get a recommendation from a doctor for various illnesses and conditions, Connecticut guidelines are on the strict end of things.

The state also mandates an on-site pharmacist for medical marijuana.