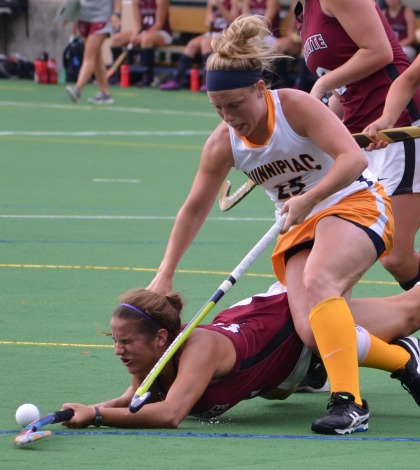 The Quinnipiac field hockey team lost its first game of the season Friday afternoon, giving up three second-half goals to Boston College in the process.

The Bobcats had a two-goal lead with less than five minutes left in regulation on Sunday, but again couldn’t keep their opponent off the board toward the game’s end.

“We have to limit mistakes, we made our own, then we had to lay in it at the end,” Quinnipiac head coach Becca Main said.

Quinnipiac took an early lead thanks to Danielle Allan, who scored at the end of the first half to make it 1-0. Allan scored again at 56:27, finding the back of the net off a rebound to stretch the Bobcats’ advantage to two goals.

The Leopards, however, would storm back at the game’s end.

Freshman Rosie Shanks notched Lafayette’s first goal of the day with 4:43 left in regulation, cutting the lead to 2-1.

Shanks then scored the tying goal with no time left in regulation on a penalty corner, sending the game into overtime in thrilling fashion.

“Giving up possession with two minutes left in the game, you don’t do that,” Main said. “We know [Lafayette] can break, we know they can run, they have really talented players.”

Brittany Blass notched the game-winner with less than four minutes remaining in the first overtime period, giving Lafayette a 3-2 victory.

“In overtime, it’s a situation that’s exciting for the fans, but for the rest of us it’s a matter of who’s left standing,” Main said. “Unfortunately, we couldn’t get the job done.”

Quinnipiac goalie Megan Conaboy had 10 saves on the day.

“For us, we are playing a bit beyond our years, so I’m pretty proud of that and pretty pleased with that,” Main said. “For a group of young players who haven’t played together and haven’t played college hockey, we had a pretty good week.”

With the loss, Quinnipiac falls to 0-2 on the season. The Bobcats look to rebound next Sunday, when they host Penn State at noon.