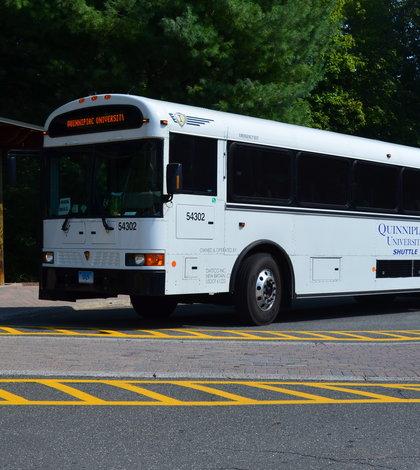 The new academic year brought new policy changes for students, including some specific to freshman. These policies include shuttle availability, visitor limitations and new alcohol fines.

For the first three weeks, first year students will be unable to take the downtown New Haven shuttle on Thursday, Friday and Saturday nights, according to Associate Dean of Student Affairs Seann Kalagher. This will go into effect starting this weekend and will end the weekend of Sept. 12 through Sept. 14. Freshman students will be allowed on the express shuttles to New Haven starting Sept. 18.

“The main reason for doing this is because we are trying to get students to be engaged here on campus when they first arrive,” Kalagher said.

Rather than simply showing your Q-Card to get on the bus for the first few weekends, you will have to tap your card to a device that will tell the Public Safety officer if you are eligible to ride the shuttle. This new system will only be in place for the next few weekends, but the university is looking into getting this tap system permanently, according to Kalagher.

He said Residential Life and the Student Programing Board plan to add more programming during the next few weekends.

Kalagher explained the university knows they cannot tell students they cannot leave campus. However, they want freshmen students to get to know each other and acclimate with the campus.

“We are not telling first year students that they can’t leave,” Kalagher said. “We are just saying that one way of getting off campus will not be available for the first three weeks.”

He said the university has looked into studies about how important this is for freshmen, especially at the start of their first semester.

Some freshmen disagree with the university’s decision.

“I think it makes it very difficult to get off campus,” freshman Luke Feidner said. “I guess it makes sense but people will just find another way.”

Barstool Blackout is an event a number of students already purchased tickets to attend, but they can no longer rely on the school’s transportation.

“I’m still not sure yet what I am going to do because all of my roommates and I bought barstool tickets before we found this out,” freshman Jenny Enfield said. “We are probably going to get a bunch of people and a taxi, but it is kind of annoying because the shuttles would have been so much easier.”

While the university will not allow students to get on the New Haven shuttles from campus, they will not deny students once they are in New Haven if they are stuck without transportation back.

“If the freshman student is downtown and needs a ride back, we would not tell them no,” Kalagher said.

Kalagher said the same swipe system used to get on at Mount Carmel will not be in effect in New Haven.

Students will not be allowed to check in an overnight visitor who is younger than 17 years old, according to Kalagher.

“Often times with younger people, when issues do arise, it becomes particularly difficult when somebody who is considerably younger than our population is involved,” Kalagher said.

From a safety perspective, if the visitor were to get in trouble, the parents would have to be involved.

Many times, conflicts arise with roommates because visitors are coming too often or for too long, according to Kalagher.

“It’s from the point of view from the other residents that is often difficult to deal with,” Kalagher said. “It can be really difficult to have that conversation with your roommate.”

“I don’t think it is fair because I think it is up to the other roommate how often their guest can come,” junior Kiera Murphy said.

Kalagher believes there are visitors who were taking advantage of how long they could stay with the previous policy and thinks students may be “cohabitating,” and “living there almost without paying to be there.”

Murphy, however, did feel this part of the policy is understandable.

“I think the three nights in a row part is okay,” she said. “But anything else is a little ridiculous.”

Similar to the previous visitor violations, a conduct meeting will take place if the new policies are violated. In addition, students will be charged $100 for each violation.

But fines for visitors are not the only addition this year. New fines for students who violate the campus alcohol policies have been put into place.

“The reason we doing this is not to bring in hundreds of dollars from one violation,” Kalagher said.

The university compared itself to other similar universities and found many have these policies, according to Kalagher. He said some universities have much larger fines.

“Honestly I think it is a little excessive,” junior Andrew Brucella. “I don’t think they can expect students not to drink. I think a fair warning would be fine and just a conduct meeting would be a better fit.”

This new policy decision came in part after reviewing why a number of students were transferring from the university. Kalagher said alcohol is not a reason every student transferred; however it was a big enough number for the university to notice.

“We are looking at other ways to help enhance what we can do for alcohol education and prevention and look for ways that we can engage students,” Kalagher said.