The Quinnipiac Chronicle • May 4, 2014 • https://quchronicle.com/47676/sports/canisius-rallies-past-quinnipiac-baseball/ 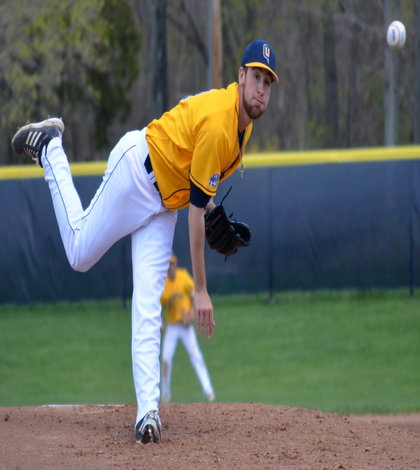 The Quinnipiac baseball team headed into Sunday afternoon’s game against Canisius on a seven-game losing skid. But when Brian Rudytis hit a bloop-single to left field to plate the go-ahead run in the bottom of the eighth, it looked as though the Bobcats might finally get back into the win column.

That was before the first-place Golden Griffins batted in the ninth.

Canisius scored four runs in the final inning, including a go-ahead RBI infield single from Brett Siddall, and went on to defeat Quinnipiac 7-5 at the QU Baseball field.

“It’s the weekend before finals, but we came out here and busted our rear ends and unfortunately just fell short,” said Quinnipiac head coach Dan Gooley. “We played a very good Canisius team, so give them credit.”

Gary Binkiewicz surrendered four walks, two hits and all four runs in the ninth before being pulled. It was his first loss on the season.

“[Binkiewicz] has done a fabulous job for us all year, and he just struggled a bit in the ninth,” Gooley said. “As much as you’d like to talk the Baseball Gods into giving you something, you only get it when you earn it.”

Canisius tied the game in the ninth when pinch-runner Mike Kricshe scored on a wild pitch. Siddall then singled to left to break the tie before Connor Panas walked with the bases loaded, and Anthony Massicci hit an infield single to make it 7-4.

The Bobcats scored a run in the ninth before Iannick Remmilard struck out Rob Pescitelli to end it.

Panas led Canisius offensively, going 3-for-4 at the plate with two homers and four RBI’s. Panas hit a two-run home run just inside of the right field foul pole in the second inning, then a solo shot in the sixth.

Guglietti went 3-for-5 with 3 RBI’s to lead the Bobcats, raising his batting average to .342 on the season.

“My BP was really good today,” Guglietti said. “I had a couple of games where I wasn’t hitting, but I put good swings on the ball and today was just one of those days where I got the pitches where I wanted them.”

Guglietti hit a two-run shot in the first inning to put Quinnipiac up 2-0, then an RBI double in the bottom half of the ninth

“He’s swung the bat well for us all year, he’s been our MVP,” Gooley said. “When he concentrates and focuses, when he gets the ball down and drives it to all parts of the field, he’s going to have success.”

Ruditys and Mike Palladino each went 2 for 4 for the Bobcats, as well

“Sheleikis battles all the time,” Gooley said. He just struggled with his command at times today, and I thought in the fifth we needed a change.”

With the loss Quinnipiac falls to 10-6 in the MAAC. The Bobcats currently sit in fourth-place in the conference, while Canisius, 14-4, holds a half-game lead over Sienna for first.

Quinnipiac travels to Fairfield next weekend for a three-game series.