The Quinnipiac Chronicle • May 1, 2014 • https://quchronicle.com/47660/news/three-arrested-over-weekend-for-marijuana-possession/ 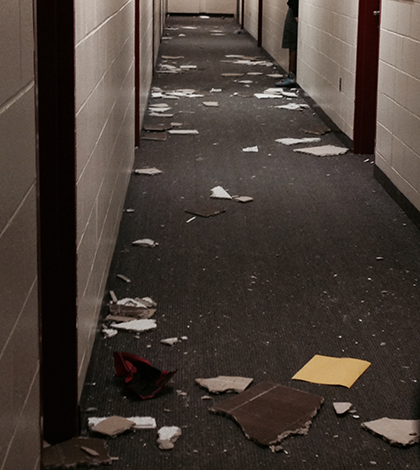 Barger said he does not connect the arrests to May Weekend because about two students are caught with marijuana on the average weekend.

“I think that a lot of it has to do with the quote-on-quote urban legend of May Weekend, this particular vandalism,” Barger said. “And the fact that the students, the freshmen, think that they have to live up to that, whatever the urban legend is.”

Students also may have vandalized residence halls because they were inside due to the rainy weather on Saturday, he said.

Taylor Brock, a freshman Commons resident, described the residence hall as a “war zone” over the weekend.

“I went down to the boy’s floor to a friend’s room and saw a disaster of ceiling tiles on the floor and trash all around the hallways,” Brock said.“I was tripping over everything. I just don’t get the point of it and why people feel the need to make a huge mess while they’re drunk.”

Public Safety is investigating who may have punched out the tiles, and the students involved will be brought through the conduct process, Barger said. 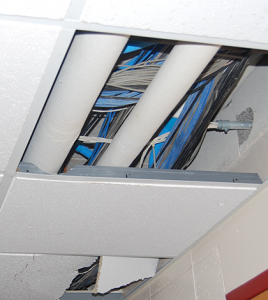 “The university is assessing the damage and working to replace the tiles as quickly as possible,” Associate Vice President for Public Relations John Morgan added.

Public Safety checked students and visitors’ trunks and bags when they entered campus. Barger said Public Safety does this year round, but students notice it more during May Weekend.

“I would like to tell you that this past weekend was no different than any other weekend, but the fact is: it is different or it was different [when the university sponsored May weekend,]” Barger said. “Really because the students are trying to live up to this urban legend, this urban myth about what May Weekend was.”

The university sponsored May Weekend and programed events for students until 2007.

“We’re actually trying to guard against those behaviors that may get students into trouble,” he said.

The number of students transported to the hospital due to alcohol was about the same as a regular weekend and there were no reported injuries, Barger said.

“I would look at us as being successful in curbing that behavior that would have caused that to happen,” he said.

On previous May Weekends, more visitors and unregistered guests came to campus, but Barger said there were fewer unregistered visitors last weekend. This may be because students were focused more on school work than in the past, Barger said.

“As times goes on and we get further and further away from that last official May weekend,” Barger said. “It can tend to get a little more academically centered as you will as compared to wanting to party.”

“[Students] were very very very respectful of the officers,” he said. “When an officer asked them to break up a crowd or whatever, they complied, so there is enough credit to be spread between Residential life, Public Safety and the students themselves, the population. Ultimately in the end they understood why we had to do what we had to do.”