Fields of the future 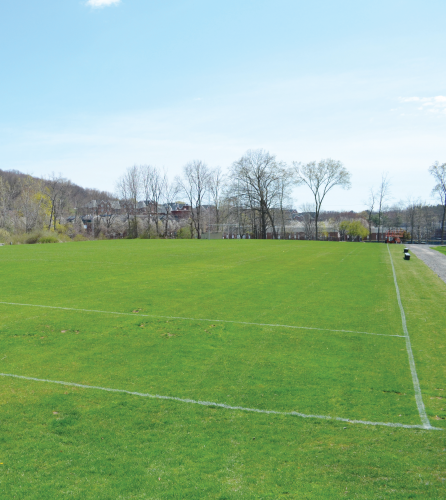 Facilities will redesign its plans for new lacrosse, soccer and field hockey fields after the Hamden Inland Wetland Commission shot down approval of the university’s original design, administration said.

The university will re-submit these new plans to the commission in the future.

The university hopes to build a new lacrosse and soccer field, a field hockey field and a rugby pitch by the fall of 2016 to comply with the Title IX case Biediger, et al. v. Quinnipiac University, Vice President of Facilities and Capital Planning Salvatore Filardi said.

The women’s volleyball team sued in 2009 after the university tried to eliminate the team. Quinnipiac agreed to settle the case last April, promising to spend at least $5 million to improve athletic facilities and make strides to treat men’s and women’s varsity athletic teams equally.

The Hamden Inland Wetland Commission chose not to approve the university’s design for the lacrosse, soccer and field hockey fields for several reasons, including the field’s artificial lighting and water run-off issues, Filardi said.

“We’re making changes to the design to address the different issues,” he said. “We’re changing the way we’re treating the water so that the concerns are eliminated. There was an issue with lighting so we’re looking at how do we tweak the field so the lighting casts less of light into the border of the wetland areas?”

The artificial lights on the fields would affect animal behavior, according to the minutes from the Inland Wetland Commission’s April 2 meeting.

“Although the potential impacts were pointed out to the applicant and its lighting expert, no attempt was made to modify the lighting to reduce impacts or explain why this was not possible,” the minutes said.

The Hamden Inland Wetland Commission requires athletic fields to have a 25-foot-wide buffer between the field and the wetlands. In the university’s proposal, there was less than 25 feet from the fields and the wetlands, according to the minutes.

“This has resulted in the invasion of non-native plants into the wetlands that surround the playing fields,” the minutes said.

The commission feared sediment would go into the wetlands when the university built concrete walls. The university also did not provide enough information on how the construction would affect animal life or the chemicals it would use for rock removal, according to the minutes.

The lacrosse and soccer team would share a field where the current lacrosse field is located, Filardi said. Field hockey will have its own field, as the Title IX settlement requires, where the rugby field is now. The rugby team will get a new pitch across the street where the soccer field is located.

The fields will have a building for locker rooms and bleachers, Filardi said.

The rugby field would be moved to where the soccer field is located because the rugby team currently plays on a pitch that is smaller than the sanctioned size, Filardi said.

In November 2013, Hamden residents said at a Planning and Zoning Committee meeting that they wanted the town to impose a moratorium on the university to prevent Quinnipiac from building more facilities, other than housing. Yet, Filardi thinks the town will allow Quinnipiac to complete these projects.

“I think we’ve had enough conversation [with the town],” he said. “The town has concerns about housing. We’re addressing those concerns also. I don’t think the town holds one project hostage over another, so I don’t think that’s kind of really an issue.”

Filardi said the university wants to build an indoor track and field facility on the York Hill campus by spring 2017, as per the requirements of the Title IX settlement. This building will hopefully have space for non-athletes to use, as well.

“Our goal right now is that it’s not a one-dimensional facility only for track and field,” Filardi said. “That it would be also have some component that would be used for recreation, so the whole campus can benefit from the facility being up there.”

Finally, the university will renovate the Athletic Center on the Mount Carmel campus by spring 2018 to comply with the settlement, Filardi said. This may include additional locker rooms, coaches’ offices and an athletics weight room.

“It frees up the current weight room for the rest of the student body,” he said. “Those are the kind of things that could give the recreation building back to the general student body.”

Since the town has not approved the university’s designs, Filardi said facilities’ plans are not “written in stone.” Once facilities gets approval from the Hamden Inland Wetland Commission, the Hamden Planning and Zoning Commission must also authorize the projects..

“Because we’re going through the town process, it’s extremely important not to come across as thinking that this is a done deal,” he said. “It isn’t finalized until the town approves of it.”

Once the town approves the plans, facilities will know how much the construction will cost, he said.