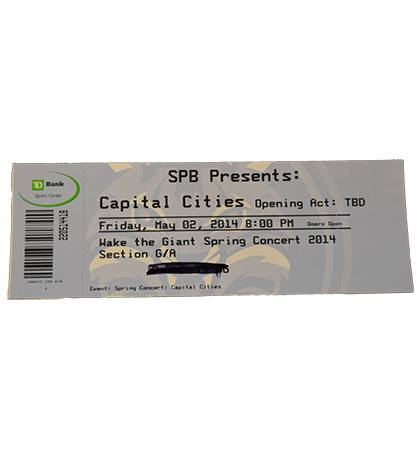 Tickets to the Wake the Giant spring concert, featuring Capital Cities and Scavenger Hunt, are now being given out for free, the Student Programming Board announced last week.

SPB re-evaluated its budget so students will not pay the original cost of their tickets. An arena ticket was $10 and a floor ticket was $15 for undergraduates.

SPB realized the organization had enough money to host a free concert and it would make money if it charged students.

“[In past concerts] we typically charged students because we wanted to break even,” Mainstage Chair of SPB Kristin Foley said. “[This year] we realized we were making money just to make money and decided there was no point in doing that.”

“Our goal as the Student Programming Board is to program for the students and we are never trying to make a profit,” Foley said.

Foley would not comment on the number of tickets SPB sold before the concert was free.

Foley said the Student Government Association gives SPB an allotted amount to spend on both the fall and spring concerts. Foley would not comment on how much SGA gives SPB for programming.

Tickets will now be handed out at tables in the student center and at the farmers market free of charge, Foley said.

Students are allowed to bring one guest for free to the concert and both Qcards and visitor passes will be checked at the door.

Foley said she hopes all future concerts can be free for students.

“I think it would be nice to provide free concerts for students to go to,” Foley said. “Fall Fest went over well as the first free concert by SPB, but you never know what could happen in the future.”

Foley said they have a positive outlook on the concert and hope more students will attend due to the free tickets.

“College students like things that are free,” Foley said. “It’s the last day of school and nothing else is going on that night since there aren’t shuttles to New Haven.”

Freshman Dante Grey said he is excited the concert is free.

“I wasn’t going to go because the tickets were expensive and I only know one song by [Capital Cities],” Grey said. “Now that I can go I am excited to see what else they are going to perform.”

Foley said each year SPB varies the genres of music for the concerts and realizes it “can’t please everyone.”

“Quinnipiac is a diverse community,” Foley said. “When we pick an artist [for the concerts] and we program events it is all in the best of students’ interests.”

President of SPB Robert Grant said SPB tries to create a “well rounded music choice” that appeals to all students.

“There’s so much that goes into picking a concert that students don’t realize,” Grant said. “We always try to work with what students want and what has been shown through our surveys.”

Even though the concert is free, freshman Michael Rotondo said he does not plan to attend the spring concert because he is not interested in Capital Cities.

“I think having the concert be free will entice more people to attend, but I still do not plan to go regardless if it is free or not,” Rotondo said.

Capital Cities was on the survey sent out to students last semester for the spring concert and “pop rock genre” was one of the most popular genres selected, Foley said.

“Even if you only know that one song by [Capital Cities,] they have a fun and upbeat stage presence and it is going to be a great time,” Foley said.