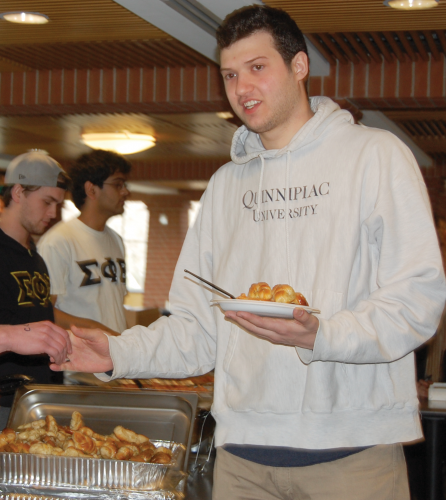 The seniors were out celebrating their last spring break, but Jason Sullivan was back and forth with doctor’s appointments, a biopsy and CT scans. In the blink of an eye his life would take a sharp detour.

“There is a 20 percent chance the bump is Hodgkin’s Lymphoma,” the doctor told him that Friday after operating on a lump Sullivan found in his neck.

“When they said that, I immediately had a panic attack,” Sullivan said.

Three days later, Sullivan was back at his off-campus house when he got a call from his mother.

On March 15, 2014 Sullivan was diagnosed with stage 2 Hodgkin’s Lymphoma, a cancer of the lymphatic system of the immune system. Stage 2 means two lymph nodes have the cancer or the cancer is in the portion of tissue or an organ close to the lymph nodes, according to the Mayo Clinic.

“It was completely overwhelming,” Sullivan said. “I was at my house and I just remember just shaking and being so afraid.”

Sullivan said he immediately wrote to his Sigma Phi Epsilon fraternity brothers in a Facebook group, telling them the news. Within 15 minutes of writing the post, Sullivan had nearly 30 brothers at his house.

“It was such a heartwarming moment,” Sullivan said. “It kind of felt like my graduation. That felt like my diploma more than anything. It really went to show how much we truly care about each other… There is no word to describe how much these guys mean to me.”

Sullivan joined the fraternity in the first semester of his sophomore year, after learning his grandfather was a member of the same fraternity at Boston University in the ‘60s. He said upon joining the fraternity his grades and academic standing improved.

Rebecca Peluso, Sullivan’s girlfriend and a Quinnipiac alumna, said his fraternity brothers have helped both her and Sullivan.

“He has been so brave through everything and the support of his friends and family really helps,” Peluso said. “He’s a very strong individual so if there’s anyone who can get through this I know he can. He hasn’t let it get him down and has stayed in high spirits and that’s all I can ask for.”

Upon finding out about his diagnosis, senior Stanley Martone and a number of other brothers organized a pasta dinner to raise money for Sullivan’s medical bills.

“To be honest I didn’t really know how to give him my condolences so I just told him ‘I am going to throw you a pasta dinner because that is all I know how to do and we are going to make it huge,’” Martone said.

The event took place in the upper cafeteria last Wednesday and was open to all students and faculty members on campus. Each person paid $3 and could have all the pasta and desserts he or she wanted.

“We haven’t really been able to see Jason all that much this semester and that has been tough on all of us because he is a big part of our fraternity and he is a senior and a leader in more ways than one,” sophomore Jack Brady said. “So it is hard without him but we are doing everything we can for him.”

In the end, the Crush Cancer event raised $2,400 for Sullivan and Frank Porzio, another brother in SigEp who survived cancer.

“In this fraternity we always talk about your family away from home and that is what we are doing with this event here,” junior Trevor Larrubia said. “We are trying to come out and support Jason and show Frank Porzio that we are here for them and regardless of what they are going through, they are not going to fight alone.”

At the event as well as their formal, all the fraternity brothers wore green ribbons on their chests. The green ribbon symbolizes lymphoma causes.

“This blows me away when they do stuff like this,” Sullivan said.

Sullivan said the boys in his fraternity always help people in very physical ways by donating food and money, but now they have to help “in a more abstract way.”

He says on his lowest days he talks with his parents or goes for walks, but it is looking through his phone at texts from his brothers and friends that strengthens him the most.

“It just shows over the course of the four years who my friends really are,” Sullivan said. “There have been a lot of people that have reached out to me but these guys have just been on a whole new level.”

Sullivan is treated at Dana Farber Hospital in Boston. He is undergoing ABVD treatment, where four drugs are introduced in chemotherapy in 12 cycles.

He makes the trip into the hospital every other Monday to receive his treatment. This past Monday he finished cycle 1B.

“It’s surreal, it’s almost like you are in this limbo phase like my life is not in my hands anymore,” Sullivan said. “It is in the hands of my parents and these doctors and it is almost this surreal moment where you have to just let go of certain things and just understand that there are certain circumstances that may come about where you are not going to be able to handle things.”

Sullivan thinks he came to understand the fact that he has no control because of what he has been studying in school and the way he looks at situations. Sullivan will receive a bachelor’s degree in sociology in May. He says through studying sociology, he is able to get perspective on his situation.

“Because I went through sociology, I have seen first hand, seen in documentaries and worked with children who have gone through being completely fine to their absolute worst and coming back down,” Sullivan said. “Seeing them go through that and seeing myself go through that same thing, it’s like I comparatively examine how to go through this situation and maintain an equilibrium.”