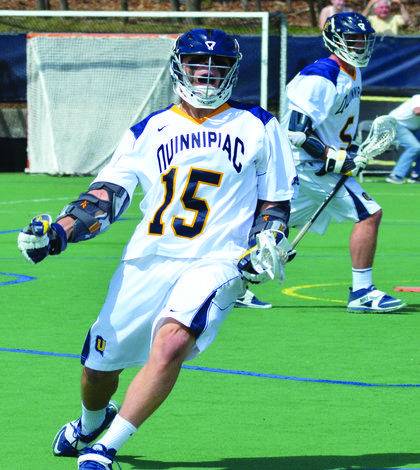 Whether at Hill Academy or Quinnipiac University, sophomore men’s lacrosse player Ryan Keenan knows what it means to work for success.

A native of Oshawa, Ontario, Keenan attended Hill Academy, regarded as one of the premier programs in North America for lacrosse. Next season, Quinnipiac will have three more players from Hill Academy join its roster. The demands of the program, Keenan said, prepared him well for the college transition.

Keenan’s father, a former National Lacrosse League player, pushed his son to start playing at 3-years-old. In Canada, however, lacrosse is typically played in box form, which is an indoor-style game. It is played on a hardwood floor and at a faster pace, which Ryan compared to basketball and hockey.

He did not begin playing the more American recognized field game until he was eight or nine. At that point, the level of competition was far below challenging standards.

“In terms of field lacrosse, there wasn’t really that great of competition,” Keenan said. “Box [lacrosse] was always the main sport. Hill Academy is really the place you want to be to reach that next level in field lacrosse.”

His father, meanwhile, was coaching in the NLL. At that time, the school was up-and-coming and Brodie Merrill, the school’s director of lacrosse, suggested Keenan join. From the moment he enrolled, Keenan believed it was a great fit.

The coaching roster is highly qualified at Hill Academy. Each has playing and coaching experience, although minimal, at the collegiate level. Almost all members of the coaching staff have been drafted by NLL teams as well.

“Obviously really experienced guys, excellent players in their day,” Keenan said. “It really helped me transition to the college level because they had that experience. It really got me to the level I wanted to be at.”

The coaches demand a lot from their student-athletes, requiring six hours of practice, strength and conditioning training and “high-calibre gameplay” weekly for the U-16 team. There is also a U-18 team, demanding four hours of the same categories. The post-graduate team plays year-round lacrosse and are handed a heavy workload, preparing them for the next level.

“Everything is really focused around your lacrosse schedule and you’re really just with your teammates all the time, unlike a public school,” Keenan said. “Definitely more demanding, but it really helps you try and reach your best.”

Playing at Hill Academy required a lot of travel south of the border. Teams in the United States were the best competition for the Canadian prep team. This also allowed American universities to recruit the Canadian prospects.

Quinnipiac, Keenan noted, started the recruitment process late. Two summers ago, the team saw him play at a tournament close by. The summer after his senior year, he was deciding on whether to attend college or complete a post-graduate year at Hill Academy.

“I liked him the minute I saw him,” Quinnipiac Head Coach Eric Fekete said. “He was a rising senior who was available at that point, who was deciding whether he wanted to do another year of high school. We kind of grabbed him when we saw him. It was a great decision.”

Keenan recorded only two goals and one assist in his freshman season. With 32 goals and seven assists already this season Keenan trails only junior Michael Sagl in points, who has 43. Keenan attributes his improvement to learning from the upperclassmen and taking a concerted initiative to have a bigger role this year.

While Fekete works on finding a balance between providing an “environment for success” and not “overloading them with too much,” he feels Keenan has transitioned smoothly to the collegiate game. Hill Academy, both Fekete and Keenan believe, contributed positively to the sophomore’s success because of the strict lifestyle it required.

“It was demanding, fast-paced; it was just an environment that was similar to what it is here,” Keenan said. “I was happy because it was something I was used to, being out there every day for long practices and just getting after it with the guys.”