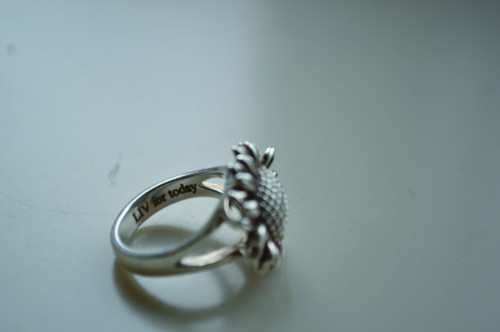 Brianne wears this sunflower ring that has "LIV for today" engraved on it.

She thinks about her every time she sees that spot on her bedroom floor.

“I just look at that place on my floor so many times where we just both stopped and screamed,” Brianne said.

Brianne’s phone rang. It was Sarah, a friend from home. All they could hear was Sarah screaming. Brianne took her phone into her room.

All Sarah could say was, “Olivia.”

Brianne thought Olivia was probably in the hospital, that something was wrong, but it couldn’t be serious.

“Have you ever had to catch your friend from falling on the floor because she was in shock?” Hannah said. “I have.”

Hannah says Brianne collapsed into her arms and they both fell to the floor. Brianne’s phone fell out of her hand. Hannah kept asking her what was wrong.

All Brianne could say was, “Olivia’s dead.”

From that day on, everything changed for Brianne.

“You get that phone call and you realize you’re not invincible anymore,” she said.

Brianne Mastaj, a junior at Quinnipiac University, thinks about Olivia every day. Olivia was one of Brianne’s best friends since middle school. She was a rising junior at University of New Hampshire. Olivia was on the UNH Dance Team at UNH and was planning on majoring in communications. Brianne and Olivia still stayed in touch despite the fact that they went to different universities.

Olivia Rotondo attended the three-day Electric Zoo Music Festival on Aug. 31, 2013, in Randall’s Island, N.Y., where she overdosed on the club drug “Molly” and went into cardiopulmonary arrest and died shortly after.

Olivia and another concert attendee she didn’t know at the concert overdosed. Four other people were hospitalized from taking molly. Concert organizers cancelled the third and final day of the concert because of the deaths. The concert is scheduled to come back this summer, but the festival plans on cracking down even harder on drugs this year to prevent any hospitalizations and making the shows shorter, according to the NY Post.

Friends told Brianne to not look at the news for those few days that she was home. After a couple of days she decided to look because she thought she was doing better. The first article she read blamed Olivia and Jeffrey Russ, the 23-year-old who also passed that night, for the cancellation of the second day of the Electric Zoo Music Festival.

“I wanted to throw my computer across my room,” she said.

Brianne remembers Olivia as a careful and responsible person. She was loved by every person and had an amazing family. Olivia was always the first one to tell her friends to be safe.

“She was perfect, she was beautiful, she was fun and she was always that person who loved life. She would do anything,” Brianne said as she rested her head on the couch and looked to the ceiling. “She would go out with you, sit in bed with you…you could always count on her to be there.”

MDMA (methylenedioxymethamphetamine), also known as molly, is a drug sold as a pressed pill taken orally, or as a powder snorted or swallowed. Molly is a form of ecstasy. A typical dose lasts four to six hours according to drugpolicy.org.

Molly gives energy, euphoria, empathy towards others, and distortion in time perception. In high doses, molly can disrupt the body’s ability to regulate temperature.  This rarely leads to an increase in body temperature, which can result in liver, kidney, or cardiovascular system failure, even death.

Molly users could experience other symptoms such as muscle tension, involuntary teeth clenching, nausea, blurred vision, faintness and sweating according to the National Institute of Drug Abuse.

Brianne hadn’t seen Olivia in a while. Brianne studied in Australia during the spring semester of 2013. When Brianne returned, Olivia left to work on a cruise ship for the entire summer.

Toward the end of summer, Olivia was back in town. She asked Brianne to go to UNH with her for a few days. Olivia loved school and would even call UNH her Disneyland.

“I thank God I had those three days with her,” Brianne said.

Brianne thinks back to how Olivia decided to take a detour on their way to New Hampshire and got them lost for an hour. She laughs as she thinks how badly she had to use the bathroom but Olivia wouldn’t pull over.

Brianne can’t remember everything they talked about during those three days but she does recall their talk about one of Olivia’s good friends from home who had passed away. They even talked about the 19-year-old woman who died at a concert a few days earlier.

“It was like nothing,” Brianne said. “You talk about those people, but you don’t think you’re actually going to be them.”

On their ride to UNH, “Wake Me Up” by Avicii came on the radio about three times. Brianne smiles and says Olivia said they were going to hear that song 10 more times that night.

“I remember we got ready to it, we went out to it and now whenever that song comes on, it’s a memory,” she said.

During those three days they were together, Olivia wouldn’t stop talking about the Electric Zoo Music Festival she planned to attend in about a week. Brianne said Olivia loved electronic music like Avicii and how she enjoyed good music.

Brianne knew Olivia had taken molly a couple of times before. Olivia had always been careful the previous times so no one ever thought that it could kill her.

Brianne was with Olivia when she first bought the molly at UNH during those three days they were together.

Brianne hadn’t heard of the drug until the middle of her sophomore year in college, but still didn’t really know much about it. She said Olivia ended up misplacing the molly she bought with Brianne. Olivia bought more at the Electric Zoo Music Festival.

“I heard one person passed away from it and then the next person was my best friend,” she said. “The one time I encountered it, I was with my best friend who ended up dying from it.”

Brianne says she can’t remember their last conversation together, or what she wore or how her hair was.

“You don’t think that that’s going to be the last time you see someone,” she said.

Olivia’s funeral was six days after she passed away.

Brianne and her friends covered the casket with sunflowers.

Brianne and her friends Hannah Gardella, Sarah Murray, Tessa Jacobs, Alyssa Lanzi and Olivia all went to Saint Charles Academy in Woonsocket, Rhode Island where they became friends in the 7th and 8th grade. Whenever they see the sunflowers, they think of her because she was always so positive.

“She always looked to the sun like sunflowers do as they grow,” Sarah said.

“Carrying her down an aisle was the hardest thing I have ever had to do,” Brianne said, shaking her head and beginning to cry. “It’s so hard to think that even something as nice as driving my car with the windows open, that she’s not going to do that again. I saw a kid fall down on his bike today and I just thought how Olivia is never going to have a kid to teach how to ride a bike or how she’s never going to have a wedding.”

Hannah says every stepping-stone in her life is a little broken now and Tessa says it feels like there is limb missing.

Brianne and her friends keep moving forward though and living life for Olivia, because they know how much she loved it.

“Olivia gives me the strength to get through it,” Alyssa said.

“It’s hard because it’s all backwards. She should be experiencing it herself,” Brianne said.

Brianne said she and her friends could just lay in bed all day talking about Olivia.

“She wouldn’t want that though,” Brianne said. “She would want us to go out…and just live life.”

“Everything happens for a reason” is something that Brianne hears often.

“I literally just want to say, ‘go f*** yourself,’ because there’s no reason why this should’ve happened,” Brianne said, shaking her head.

Brianne said she wishes she could say Olivia’s passing has affected her life for the better. She tries to find the positive side, but she can’t.

Brianne and her friends wear blue Armstrong bracelets with the phrase “Live 4 Liv” written across them in white.

“I miss her, I miss her all the time,” Brianne said. “It’s like agony. You know you’re never actually going to see them again. I talk about her all the time but to go see her, I go to a gravesite. Her 21st birthday is on the 17th of May. When I go to see her, she’s in a stone, she’s not even there. She didn’t even make it to 21 yet.”

Brianne missed Olivia’s last birthday when she was studying abroad in Australia. Their other friends talk about that day often and how amazing it was. She knows Olivia will be with her in spirit, but life is not the same.

Toad’s Place is never in Brianne’s weekend plans. The fear of seeing someone who might be on molly terrifies her. She never knows when something will remind her of Olivia.

“Recently, it’s been easier to go out and be happy,” Brianne said. “But the second I might even see something, or think of something or hear that song that comes on, you don’t even see it coming. It’s like a wave of pain and agony and emotion. You break down.”

Brianne said she was worried about sharing Olivia’s story because she thought people would dismiss it just like she did. She thought something like overdosing would never happen to her or her friends.

“We are 20 years old, we are going to experience things, we are going to want to do things and to feel a way that makes you feel invincible,” Brianne said. “That’s what everyone thinks they are.”