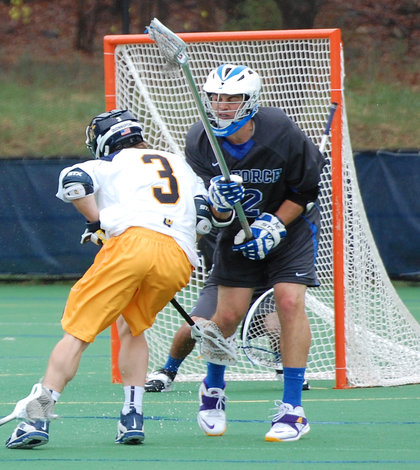 The Quinnipiac men’s lacrosse team has controlled its own destiny going into the playoffs every year under head coach Eric Fekete. This season, however, in the team’s first year in the Metro Atlantic Athletic Conference, the Bobcats could only do one thing: wait and see.

Quinnipiac finished the regular season by beating Air Force 15-10 on Saturday afternoon at the Quinnipiac Field Hockey and Lacrosse turf complex. The win snaps a four-game losing streak for the Bobcats.

Quinnipiac will not participate in the Metro Atlantic Athletic Conference Championships, however, as Marist defeated Canisius by six goals on Saturday afternoon. The Bobcats needed Marist to win by seven goals or more in order to clinch a birth into the postseason.

“We’ve never not had our destiny in our own hands, so it’s been a change for us,” Fekete said. “But, what happens happens. I’m proud of today and I am proud of our year. I try to gauge every season by the growth from the beginning to the end, we have turned a lot of pages and done a pretty good job, developing the way we play the game.”

“I think it started from the first shot of the game, I made that first save and that’s huge for a goalies confidence,” Conners said. “In the second half, I usually come out a little bit flat, but I was really seeing the ball well. I saw the ball well for the rest of the game.”

“Gill is our backbone and the defense of the operation,” Fekete said.

Conners help hold on to the 13-10 with three minutes remaining. He made key save after key save down the stretch, keeping the Falcons off the scoreboard. The senior netminder upped his career total to 366 which stands just three saves out of fourth place all-time at Quinnipiac.

“I thought we played some of the best lacrosse we played all year, Conners said.”

Ryan Keenan and Kevin Diehl added goals in the final minute to clinch the win.

Dylan Webster finished with two goals, while Tom McNaney, Kevin Diehl, Michael Sagl and Carmen French each had a goal and an assist. Sagl extended his point streak to 33 straight games.

“Gill played great today and Matt Diehl had another great scoring day and Ryan Keenan came on strong,” Fekete said. “I’m always happy to win, but I love it when it is a really good team win. Almost every guy on the team made some contribution, and that is the way we love to play.”

“They did a really good job. I really like this team a lot, I’m very proud of them,” Fekete said.

“I’ve only been here two years, but we’ve owed a lot to the guys who have been here for four who have given their commitment to this program for the past four or five years of their life,” Conners said. “We really owed it to them and I thought that we played like it.”