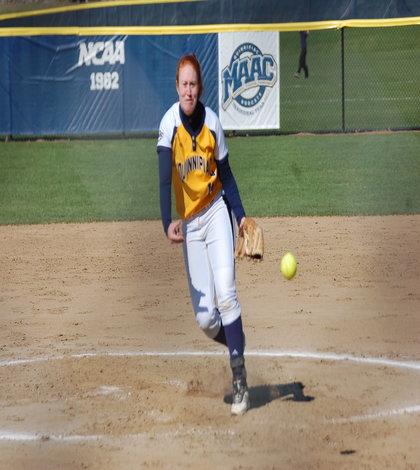 Quinnipiac softball defeated Sacred Heart 4-3 on Thursday behind the bats of Jordan Paolucci and Paige Giunta, along with a solid outing on the mound by Hannah Lindsley

Lindsley threw all seven innings, giving up nine hits and three runs. With the win, she moves to 6-8 on the year. Quinnipiac Head Coach Jill Karwoski noted Lindsley had been fighting a sprained ankle, wearing a boot the past two weeks.

“It was really good to see Hannah go seven innings,” Karwoski said. “Last week she was limited with her ankle. She’s really been taking good care of it so it’s good to see her persevere and put up seven innings.”

Run support came primarily in the fourth inning. Her team trailing 2-1 after 3 hitless innings, Paolucci recorded the first hit for the Bobcats by sending a home run over the center field fence tying the game at two apiece.

Karwoski believes Paolucci is a consistent go-to player for the team as the season progresses.

“Jordan’s just been that constant,” Karwoski said. “She brings a lot of energy in the dugout, too. Her leadership skills, they’re natural; they’re nothing that’s taught. It’s something all the girls have a ton of respect for.”

In the same inning, after Dani Edmands was walked, Giunta hit a deep shot to right center field. Edmands came home, giving the Bobcats a 3-2 lead.

Behind the plate, Edmands kept the Pioneers at bay, keeping the ball from going behind her and allowing extra bases because of it.

“She kept the ball in front of them,” Karwoski said. “They didn’t get any extra bases off of wild pitches and passed balls.”

The first run for the Bobcats came in the first inning, started by a walk for Nikki Barba. A groundout from Abby Johnson advanced Barba to second and an errant pitch allowed her to advance to third. Paolucci flew out to center field and Barba tagged home.

Karwoski was happy to see her team play small ball, something she noticed her team didn’t have many opportunities to do in their past few games.

Keilani Finley started a series of hits for the Bobcats in the fifth, lining one to left field. A bunt from Solt and a hit from Johnson loaded the bases. With two outs, Sacred Heart pitcher Jamie Carlson walked Sydney Robey, giving Quinnipiac its final run.

On Saturday, the team starts a double-header at Marist. Karwoski hopes the team effort shown against Sacred Heart will be there, too.

“Our girls did play well,” Karwoski said. “Tomorrow we’re just going to do some light hitting, feel good going into the weekend.”