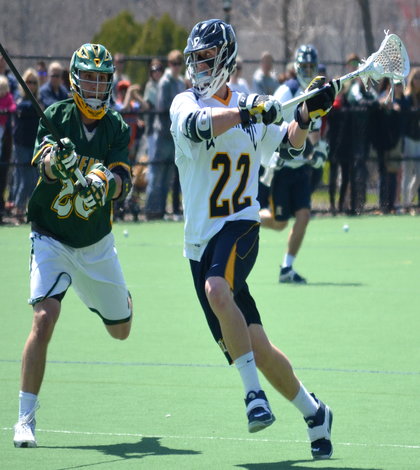 The Quinnipiac men’s lacrosse team came into Saturday afternoon’s contest against Siena needing a win in order to clinch a spot in the 2014 Metro Atlantic Athletic Conference Championships.

After being in control for most of the first half, the Bobcats ultimately fell short to the Saints by the final score of of 18-12.

The Bobcats will now have to wait and see if they will make the four-team conference playoff, based on what the other six conference teams do next weekend.

After scoring nine goals in the first half, Quinnipiac managed to only score just three more goals for the rest of the game. Siena outscore the Bobcats 8-3 in the second half.

“I think like always this year, sometimes we’re our own worst enemy,” Quinnipiac head coach Eric Fekete said. “I thought our game plan was really good. We had it dead on in the first fifteen probably twenty minutes of the game and just things started to come unglued.”

Quinnipiac let up two goals in five seconds as the first half came to close, which tied the game up at nine. The Bobcats biggest lead of the half came when Matt Diehl scored a goal assisted by Michael Sagl with 6:03 remaining in the second period.

Meanwhile, Siena had plans of its own when they came out of the second half, scoring six straight goals to take a 15-9 lead.

“We let it slip away, we turned the ball over a few too many times in the third quarter,” Fekete said. When you get out on a team in the first half like this, you got to jump on them. You can’t let them back in the game.”

Siena held the Bobcats scoreless for the first 24 minutes of the second half. Dylan Webster took advantage of an extra man opportunity with 5:44 left in the game when he scored right outside the crease, but it was too late for a Quinnipiac comeback.

“They were 9-for-12 in the face offs in the third quarter,” Fekete said. “When they’re scoring, getting the ball back off the draws it’s hard to get back in the game. It was probably the recipe for success versus disaster.”

Webster and Ryan Keenan each led Quinnipiac with two goals and two assists in the game. Diehl was right behind them with a pair of goals and an assist.

The loss moves Quinnipiac to 5-7 on the season and 3-3 in conference play. They are set to play at Yale on Tuesday, game time set for 7 p.m.

“At this point we’re going to need someone else to win to get us in the playoffs,” Fekete said. “It’s disappointing. We’ve been in six straight years so that’s something we’re not used to doing. We’re used to controlling our own destiny.”