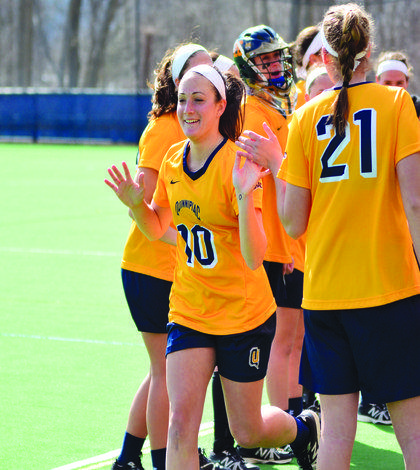 Those were the first words that came out of Shana Maglio’s mouth after she hit the turf on March 6, 2013.

Maglio, a freshman at the time, was playing in her third career game at Quinnipiac when she tore her anterior cruciate ligament.

The midfielder was on the defensive end of the field when an Iona attacker bolted towards the net, then quickly cut in the other direction. Maglio followed her cover, as she always does, when her body twisted and she heard the pop in her knee.

“It felt like someone was stabbing me in the knee with a knife,” Maglio said. “I’ve never felt so much pain in my life.”

But the action continued as the referees didn’t blow the whistle until there was a stoppage in play. All the while, Maglio stayed on the ground in pain, calling for help.

“We all heard the screams, we immediately knew it was bad,” Quinnipiac Head Coach Danie Caro said.

The team’s trainer ran out onto the field to help Maglio as soon as the whistle finally blew. Maglio was in pain, and only one thought was running through her mind.

“Please tell me it’s not an ACL tear,” she said.

“We’ll have to check you out first,” someone from the training staff responded.

Maglio managed to get up and walk to the sideline. She attempted to run up and down the out-of-play territory as she wanted to come back into the game, a sign of both her physical and mental toughness, Caro said. But then Maglio tried to cut and her knee felt weak. The ACL injury was later confirmed, and she would miss the rest of the season.

Maglio didn’t let the news get her down, though, because being pessimistic just wasn’t in her nature.

“As soon as she got hurt I remember her telling me that her goal was to recover in half of the time of a normal ACL injury,” Quinnipiac goalie Samantha Tilts said.

Maglio began “pre-hab,” before her surgery two months later, trying to strengthen her knee as much as possible. She also took part in various other stationary activities, like warming up the goalie before games.

“She was able to stay engaged in the team and still make a contribution to what we were doing even though she wasn’t able to play,” Caro said. “You could tell that she just really wanted to be a part of things.”

Maglio finally had the surgery on May 14, just over two months after the injury. She was on crutches for about a week, then began to walk again. She was still in the early stages of the recovery, a process that was harder than she had initially expected.

Maglio began physical therapy three times a week, then went to the gym on her own on off-days. She was determined to get back at an accelerated pace. All she wanted to do was play again.

“She’s one of the hardest workers in the rehab room,” Tilts said. “Everyday we would come in from practice and she would be in there, doing her rehab. She was there for hours at a time.”

Caro said Shana’s work ethic in the weight room allowed her to become a leader, as she provided an example of how other injured players should act.

“When we had freshmen who would sprain an ankle, Shana was there to tell them what they needed to do to get back, what was acceptable behavior and unacceptable behavior in the gym, and how they should go about their business,” Caro said.

Maglio returned to action on Feb. 22, a little over nine months after her surgery. She scored a goal during the second half of play in that game against Connecticut, an encouraging sight to see for her teammates and coaches.

“As soon as she got to play we were all so excited,” Tilts said. “She had worked so hard to get there, to recover so fast, and seeing her play was a joy for all of us. You can tell she loves the game.”

Caro agreed that seeing Maglio play again was a joy, and went on to say how much the team missed her toughness on the field while she was injured.

“The first word that I think of when I think of Shana is that she’s feisty, she wants to fight for the ball,” Caro said. “She’s not our most skilled player, or one of our fastest players, but she is one of our toughest players.”

Tilts said Maglio is one of the vocal leaders on the field for the Bobcats, as well. She is always talking to her teammates, especially Tilts in goal.

“She’s always saying ‘I’ve got you, I’ve got your help, I’m coming,’” Tilts said. “Her attitude reflects exactly how she plays. She’ll back up what she says with what she does.”

“She just reads the game and she knows what the team needs, she’s willing to get in there,” Caro said. “We’re fortunate to have a player like her that is willing to do all of the little things to make a team competitive out there on the field.”

Maglio currently has three goals and one assist for Quinnipiac this year, and has started 11 of the team’s 12 games. But the numbers don’t tell half of her story and the journey she took to getting back on the field.

“Now that I have overcome my fear, I know that I can achieve anything I put my mind to,” Maglio said.

When reflecting on the situation, Maglio thinks the scar she has on her knee from surgery may be what best represents her accomplishment.

“I use it as a reminder that I have achieved something so great, and that anything in the future that I am fearful of, I can always overcome it,” she said.