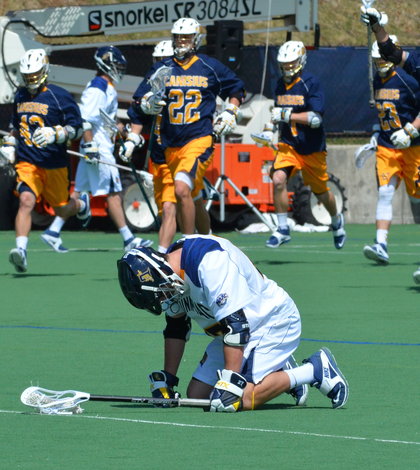 Unfortunately for the Bobcats, they’ll have to wait a little bit longer to do so.

Quinnipiac scored six unanswered goals in the fourth period of play, but its comeback effort fell just short as the Bobcats fell to Canisius 11-10 at the QU Lacrosse Field.

“We had our destiny in our own hands today, and we knew that coming in,” Quinnipiac Head Coach Eric Fekete said. “We fell down in a hole, and I’m certainly proud of the guys for battling back, but we made some mistakes along the way, especially in the first half. We can’t make those kinds of mistakes in a game like this.”

Canisius took a 7-2 lead into halftime, then expanded the advantage to 11-4 after three quarters of play.

“We’re capable of playing with who ever we want, it’s just our ability to keep ourselves out of harms way,” Fekete said. “My concern all year with this team is not who we play, but how we play.”

Quinnipiac held the Golden Griffin’s scoreless in the final 15 minutes of play, ultimately getting within one goal when Ryan Keenan picked up a ground ball out in front of the goal and blasted it into the lower-left corner of the net with 1:19 left.

The Bobcats had a flurry of chances on front of the net at the end to tie the game, including Dylan Webster’s shot with under 10 seconds remaining. Webster fired high, however, and Canisius held on.

“We had two great looks at the end, we just didn’t hit them,” Fekete.

Webster and Matt Diehl led Quinnipiac with two goals and an assist each. Matt Kycia had two goals of his own, while Michael Sagl had a goal and two assists.

Freshman Zach Vehar went 19-of-25 in faceoffs, including a 13-of-14 draw mark in the second half.

“He’s really come in and done a great job for us,” Fekete said. “Especially when the pressure’s on, he doesn’t let momentum get in his way.”

With the loss Quinnipiac moves to 5-5 on the season, and 3-2 in MAAC play. The Bobcats will take on rival Fairfield at home on Tuesday, with game time set for 4 p.m.

“A lot of guys have had that game circled on the calendar for awhile,” Fekete said. “I wish we could have taken care of business and gotten in [the playoffs] today, but Tuesday we’ve got to come out here and play a good game.”