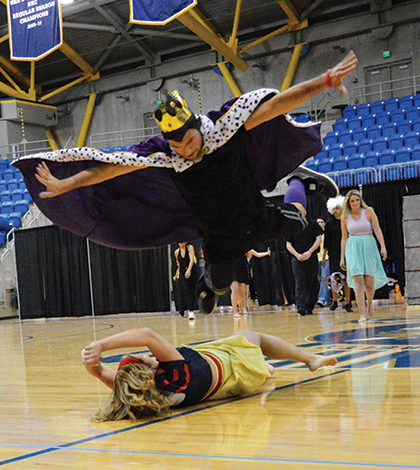 The Greek organizations raised more than $1,400 and collected cans for the Connecticut Food Bank. Sigma Phi Epsilon and Chi Omega won the can collection competition.

“We’re just so proud,” Capello said. “Our chapter needed this so badly. We’ve been working so hard and we’re so excited.”

In Pi Kappa Phi and Alpha Chi Omega’s lip sync routine, the students incorporated the Disney theme of this year’s Greek Week by bringing in several Disney characters, including Tinker Bell and Aladdin.

Sophomore Tyler Droste acted as Tinker Bell. He said he felt “pure joy and excitement” after the fraternity and sorority won.

“I just started hugging everyone around me,” Droste said. “We’re very fortunate to have the Alpha Chi Omega girls as well to help us out along the way.”

Sophomore Seth Pachman said his favorite part of the routine was the end, where the two Greek organizations held paper flags with the Greek letters and danced to K’Naan’s “Wavin’ Flag.”

This was the first year the Greek organizations paired up for the lip sync competition. In the past, each fraternity and sorority performed its own routine.

“At first it was really different,” senior Alpha Chi Omega member Teresa Santos said. “But then it actually made it a lot better because you had boys and girls and so many different people.”

At the God and Goddess event, one member from each fraternity and sorority dressed up as a Disney character, wore a toga representing Greek unity, performed a talent and answered a randomly picked question.

Kaplan dressed as Woody for the costume round and danced to the song “#Selfie” by The Chainsmokers with six of his brothers for the talent portion.

Kaplan, a dancer for a DJ company, said he thought he would not like the talent round, but it ended up being his favorite part.

“We pretty much had two days to put this together,” Kaplan said. “I honestly couldn’t have done it without any of my brothers. I needed every single one of them there.”

Grieco applied stage makeup to several of her sorority sisters’ faces to make them look like zombies for her talent. Then, the women danced to Michael Jackson’s “Thriller.”

“I’ve never won anything ever, so this is really exciting for me, especially because I’ve been so nervous the past couple weeks,” Grieco said. “I’m just so thankful that everybody’s dealt with me and was so cooperative and really helped me out just being there, letting me do makeup on them.”

Grieco said she started putting makeup on the women at 1 p.m. because it takes about an hour to apply the makeup on each person.

Beta Theta Pi is the newest fraternity on campus, so Kaplan said winning God and Goddess was “one of the biggest things possible” for the organization.

“We didn’t think we were going to win, but honestly this is huge for all of us,” he said. “Greek Week is really what we’re hoping is going to put us on the map, help us get more rushes and hopefully become one of the best chapters on campus.”