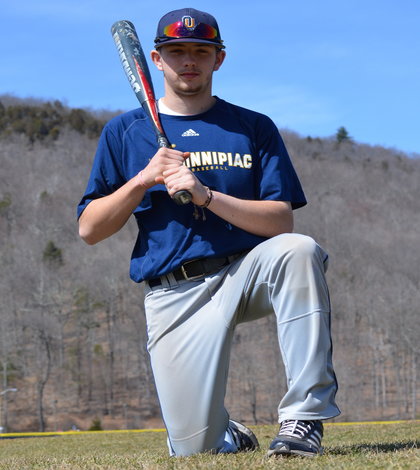 Playing under pressure is something Matthew Batten has grown accustomed to.

Competing with some of the best baseball players from all over the world, Batten describes the experience as one of the best times of his life.

“That was my first experience at a stadium so it was different,” Batten said. “Everything was loud and everything was all hyped up but it was a lot of fun.”

With ESPN covering the tournament, the atmosphere was an experience in itself. That also meant more cameras and interviews for Batten and his teammates.

“I had to do a couple of interviews before it started and then I was on top 10 plays and web gems once or twice,” Batten said. “They had this thing called ‘Building Blocks’ so I had to do a video shoot for that, showing them how to do double plays with Orestes Destrade, so it was cool I was working an ex-professional baseball player.”

Batten also had the chance to meet and talk to big name players and coaches such as Ryan Howard, Terry Francona and New York Rangers standout, Chris Drury. Although Drury was a professional hockey player at the time, he did, however, help lead his hometown baseball team to a championship in the 1989 Little League World Series against Chinese Taipei.

“He was on the Trumbull Little League World Series team in 1989,” Batten said. “He called us and talked to us about it and just told us to enjoy the moment and have fun.”

Once the Shelton made it to Williamsport, it was then referred to as the New England Regional team, as is customary. Unfortunately for Batten and his team, they would eventually fall to the West Regional team, based out of Hawaii.

New England finished the tournament with a 1-2 record as the West would go on and win the Little League World Championship. Besides an upsetting finish to its great run, the New England team was ranked fifth in the country and 13th in the world.

“It was definitely fun while it lasted,” Batten said. “It was being a superstar in your town while it happened.”

Batten would follow up on all of the assets from playing in the Little League World Series. Playing in front of crowds of 35,000 people, against the best competition, undeniably helped create a stage for his baseball career moving forward.

“I definitely got used to pressure with a lot of people watching,” Batten said. “It helped me develop no worry, like who’s watching. Also, it was the best competition at that age right then and there so it got me used to it, especially moving to college.”

Before committing to Quinnipiac, Batten played high school baseball at St. Joseph High School, located in Trumbull. He was the leadoff hitter and starting shortstop for St. Joseph, which ranked seventh in the state.

Batten has always presented a winning attitude on the field, during his baseball career and it is something he hopes to bring to the university as well.

“I see this team and this whole program turning around and doing big things in the MAAC and regionals, and hopefully super regionals or however far we go,” he said.

Aside from Batten’s on-field attributes, he presents well off the field too, something that caught Quinnipiac baseball Head Coach Dan Gooley’s attention when recruiting.

“He’s a respectful young guy, he really is,” Gooley said. “He’s very positive in what he approaches, he’s extremely positive about school. He’s the kind of kid who, not only does he have ability, but he has ability with character.”

Batten has been able to adapt to the speed of college baseball during his freshman campaign with the Bobcats, something he describes as one of the hardest adjustments. His next goal is to ultimately become a leader for his team in the future.

“I’m always outspoken on the field but I definitely want to be a leader, try to be a captain and try to help this team win,” Batten said.

But according to Gooley, Batten already displays leadership ability early in his college career.

“I think he’s a leader right now,” Gooley said. “I don’t think you got to wait to the future to see his leadership. I think his leadership is only going to get more impressive as he goes on. He’s the kind of kid that leads by example.”

Batten says playing in the 2008 Little League World Series helped give him leadership abilities and championship instincts. It is something that impressed Quinnipiac’s coaching staff, which Gooley believes helped make him the player he is today.

“A young kid like Matty Batten has been through the whole process,” Gooley said. “He’s here because of what he did in the Little League World Series. He was a good player then, he’s a better player now.”