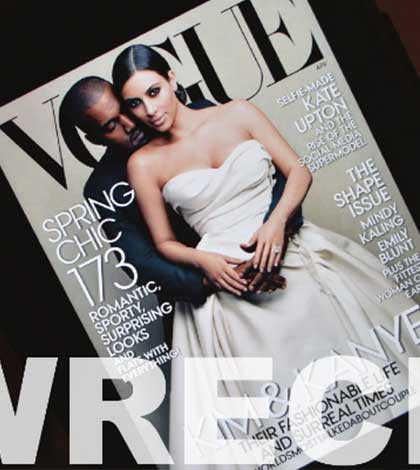 Kim Kardashian and Kanye West are at it again. The duo have managed to get themselves on the cover of the prestigious, high-fashion magazine Vogue. Anna Wintour, Vogue’s editor-in-chief, has never been Kim’s biggest fan, so why now? In her editor’s letter, Wintour immediately crushed any rumor that Kanye begged for Kim to be on the cover. She says the cover defines culture at any given time. The Kardashian-West’s do grace the covers of almost every magazine and always seem to headline entertainment news.

Not everyone is happy to see the pair on the cover of Vogue. SA few loyal readers held out hope that this was all an April Fool’s joke. Actress Sarah Michelle Gellar tweeted, “Well……I guess I’m cancelling my Vogue subscription. Who is with me???” And actors James Franco and Seth Rogan, who spoofed Kanye’s “Bound 2” music video, took it upon themselves to photoshop their heads on the entertainment king’s and queen’s bodies. That cover would have more copies sold than the original.

Some people feel Kim is famous for all the wrong reasons. Readers feel Vogue has turned into a tabloid by putting someone who desperately craves visibility on a prestigious magazine. “RIP Vogue,” writes one consumer on the magazine’s Facebook page. Readers look to Vogue to educate and inspire, not to exploit those with very little talent. Being a star of a reality show does not put someone on the same level as the greatest models and actors.

Vogue should stick to shooting famous people who actually do something other than complain that the wall in her mother’s closet is too black. Wintour says Kanye is a fabulous performer and Kim has created this image of herself in society, which takes real guts. So will this be a positive for Kim and Kanye? Yes, they are on a cover of yet another magazine. Will this affect Vogue’s reputation? Maybe, it depends who the reader is and if they will continue buying the magazine after this month.