Students can download the latest version of Crowdcast, a music playlist app five students and an alumnus helped create as interns with the Milford company DataViz. 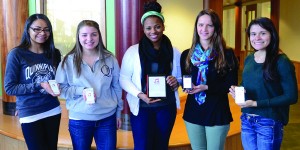 Ricci and Gualpa began their internship at DataViz over the summer, so they have seen the app’s progression from the beginning. The students helped the company pick the color and name for the app.

“I just think working with apps is pretty cool,” Ricci said. “Overall seeing an app transform from an idea all the way through its phases to be released into an app store and actually [having] people downloading it and telling our friends about it, it’s been awesome.”

The interns were encouraged to throw social gatherings where they used Crowdcast and to tell their friends about the app, Terrell said.

The first version of the app was available in the app store in February, and the updated version was released on March 27.

“The app wouldn’t be where it is without [the interns’] input and their help,” DataViz Project Manager Jason Coup said. “They’ve been putting a lot of hours into this just like the rest of us have and I think I hope that they take the same pride in having this out in the market now.”

Crowdcast is different from other music streaming apps and websites, such as Pandora or Spotify because it allows guests to vote on which songs will be played next at a party or other social gathering, Eric Vikmanis, marketing manager at DataViz said.

“With Pandora or Spotify it’s really up to the host to decide what’s being played,” Vikmanis said. “[Crowdcast] adds that social interactivity at the party, whereas if you just play Pandora you set it and leave it, but you might get bored with that genre and you want to change it.”

Guests can add songs onto the playlist or pay for their favorite song to be played next, Vikmanis said.

This “Play Next” feature is Gualpa’s favorite part of the app, she said.

Users can also flag songs they enjoy and buy them on iTunes later.

“It appeals to college students especially,” Terrell said. “If you’re at a party and you drink a little too much and you don’t remember, but you know you like some songs, you can flag them while you’re intoxicated.”

When the original version of Crowdcast released in February, users had to be connected on the same WiFi network, Vikmanis said. However, the newest version available tomorrow will allow users to connect peer-to-peer, which means they can use their iPhones as a hotspot to connect through Bluetooth, he said. This means users no longer need WiFi to use the app.

“You can be at the beach, you can be tailgating somewhere,” Terrell said. “You can go anywhere and use Bluetooth to connect to other people.”

The students were instrumental in pushing DataViz to add this multicasting feature because without it the app does not work well on BobcatNet, Coup said.

“We started to realize at some places, like on campus at QU, connecting everyone on the same WiFi network isn’t always the easiest thing to do,” Coup said. “We want not only our interns and other people on the QU campus to be able to use this, but it’s happening there [at Quinnipiac,] it’s going to happen in other places too.”

Gualpa said the app has the potential to take over campus, especially at organized events.

Terrell said the internship helped her understand how apps are built.

“I think our major is more business focused and this, we get more of a technical side,” she said. “That’s how multicasting makes sense to me too cause we learned all about routers and how to connect to them. It was not that interesting then [in class,] but now it’s a little bit more interesting.”