Confident out of the comfort zone

Right click, open Internet explorer, www.peacecorps.gov, right click close. Natalie Deduck sat at her computer day by day opening and closing the Peace Corps application, trying to make a decision as to what she wanted to do for the rest of her life. She would ask herself what path was she going to take? Did she want to commit to at least two years in a foreign country? 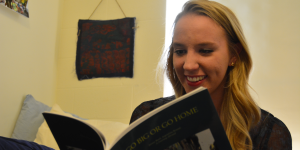 It was the start of her senior year and, like all seniors, she was coming to terms with reality and thinking about what was in store for her after graduation. During her time at Quinnipiac, Deduck made close connections with David Ives, director of the Albert Schweitzer Institute, and Sean Duffy, her political science advisor, so she went to them for some answers. She knew the two people she trusted and looked up to most would be able to steer her in the right direction.

“You know me; you care about me,” Deduck said to them. “What are we doing after graduation?”

And those next few words that came out of Ives’ and Duffy’s mouths would bring tears to Deduck as they encouraged her to apply to the Peace Corps.

Deduck left New Jersey and entered Quinnipiac in the fall of 2010 as a film major. She was involved in production in high school and, quite frankly, she was good at it. But as she dove into the School of Communications and explored her options, she realized communications was not for her. Deduck was lost within the major and craved a different type of learning.

After taking a variety of courses, Deduck fell in love with her international relations class and found a passion for political science. She persuaded her parents it was the right choice of study for the next four years.

Upon switching her major to political science, Deduck formed an immediate relationship with Duffy. He was the advisor for Model UN, which Deduck was a part of, and also ran trips to Nicaragua through the Schweitzer Institute.

Within political science, Deduck again craved finding a direction toward a path within the field that would cater to her. As she talked with Duffy, he introduced a trip he would run to Nicaragua that would involve traveling to the second-poorest country in the western hemisphere, going to the communities and assessing and evaluating the work the Schweitzer Institute had done there.

Then in the summer of 2011, Deduck accompanied Duffy and a delegation to Nicaragua, a journey that would spark her interests in exploring the world beyond the United States.

“I think what made the trip so unique, maybe in comparison to maybe other major or service trips, was that I spoke to more community members than any other trip that I know of,” Deduck said. “It was the first time that I was taken into a completely different cultural space and a completely different socio and economic space and I was speaking with people. And while I noted their differences, I noted their similarities.”

Deduck made strong connections with families in Nicaragua and for the first time was able to realize regardless of cultural and language barriers, displaying a sense of kindness, openness and respect leaves a good impression on others and can translate to an eye-opening experience.

On Dec. 1, 2013, Deduck submitted the final piece of the tedious application. That was it. She was done. All she had to do was wait and not question the decision she made.

September 2012, Deduck hopped on a plane for Buenos Aires, Argentina. She had one hefty suitcase and a backpack containing the thickest Spanish dictionary she could find. Deduck would be spending the next six months studying abroad and living with a family who didn’t speak English. She wouldn’t be surrounded by Quinnipiac students and for the first time she was on her own. 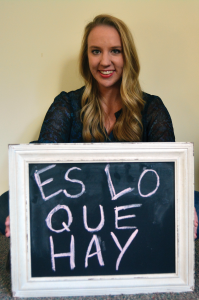 A strange decision, some would argue, but for Deduck this planning was purposeful.

Deduck spoke minimal Spanish at the time, but admits now she can hold a conversation very well with an impressive accent.

With the language barrier, Deduck needed to find a different way to connect with the people in Argentina. During her travels she gained a confidence others lack. Deduck formed a tight-knit relationship with the family maid, Susi. Deduck’s eyes filled with tears speaking about this woman who didn’t speak English. She found a different way to connect with Susi while her Spanish-speaking skills were developing. Deduck learned communicating with people of other cultures and languages would no longer be a weakness, but an ever-improving strength.

Her trip to Argentina changed her life, and opened her eyes to a new culture she will always keep dear to her heart.

Deduck’s father, Steve, remembers the butterflies in Deduck’s stomach as she walked into a public school for the first time in ninth grade. The thought of walking into a new school out of her comfort zone struck her nerves. Prior to saying farewell to her parents she told them she would be spending most of the day hiding in the girls bathroom. But with encouragement and support, she found her confidence.

“Her freshman year in high school was really the turning point in getting over her fears and never turning back,” Steve said.

“I think her greatest strength is her confidence,” her brother, Stephen, said. “From my angle she has the confidence to do anything, seize any opportunity and be whoever she wants to be.

Like her brother, Ives believes Deduck’s confidence is among her greatest characteristics and makes her stand out.

“What really impressed me about Natalie was going into Argentina by herself essentially, which I think is extraordinarily gutsy,” Ives said. “And Natalie had some tough times while she was in Argentina, but she survived them and got to speak Spanish.”

Deduck learned the bulk of her Spanish speaking skills on her own while in Argentina through speaking with the locals.

“I just really respect somebody that can take that on,” Ives said. “Go by themselves, not know the language and then make a success of that themselves. It really says something about what kind of person Natalie is.”

It was mid-December, the phone rang, and it was the Peace Corps. Deduck listened as they told her the areas of need were in the education sector. Because Deduck was unfamiliar with the education field, they encouraged her to start working with English as a Second Language (ESL) programs, to help people learn English.

“Of course I said I would do it,” Deduck said.

A walk to the Albert Schweitzer Institute around lunchtime on Tuesdays, will be a walk into a culture clash. Sitting around a square table in the back room sit Deduck, Jean Blue, an ESL instructor, and three others who come to improve their English conversational skills.

“Natalie is a very young teacher, but at the same time she is very skillful to explain a lot of special terms,” Anna, a student in the class from the Ukraine, said in her broken English.

During the hour-and-a-half-long class, Deduck and Blue read through various news articles with the students, helping them with pronunciation and explaining words.

“In my opinion, Natalie is purposeful,” Anna said, as Natalie’s eyes opened with satisfaction with the big words that Anna used. “I am impressed. Natalie knows her goals and does a lot of things to achieve her goals.”

Following the english conversation group, Deduck works one-on-one with a woman from China, Kun Shi. Not your average woman, Kunchi is one of the top surgeons in China and the president of a hospital in Beijing. With a brain full of knowledge and experience, Kun Shi struggles with suffocation of the mind in the U.S. due to her language barrier, so Deduck works with her to teach her words and phrases so she can better her understanding of the English language.

“She is, you know, a brilliant human being who can barely function at the most basic levels because of language,” Deduck explains.

Deduck lacked being an educational instructor on her resume. Once she was part of the ESL program, she was ready for the next step.

Feb. 20, 2014. Deduck walked into the Northeast Regional Office of the Peace Corps in Manhattan.

After sitting down for two and a half hours with the Peace Corps recruiter, the interview was nearly over. But before getting up to leave the room, the recruiter looked at her and gave Deduck the news she thought she would have had to wait weeks for: she would be offered the nomination to the Peace Corps.

“Just hearing those words after more than two hours of interviewing was incredible,” Deduck said. “To know that she could say that to me, right from the interview, with confidence, really meant a lot to me.”

Eighty-seven days until graduation, and Deduck finally knew where she would be going after. She would commit two years to a country which remains unknown, most likely doing work in the education sector.

Ives is confident Deduck will succeed whatever sector she is selected for.

“She has got such a nice personality and is so outgoing and so friendly and competent in terms of getting organized, so she won’t have any trouble with either program she gets assigned to,” Ives said.

An emotional roller coaster of a year and Deduck was now sure she was making the right decision. In May, Deduck will walk across the platform on the Quad, collect her diploma and in nine months to one year, she will be immersed in yet another culture for two years.

“We are so young and so capable and I am just around so many people who doubt themselves and or say I am inspiring,” Deduck said. “I don’t think that I am inspiring.”

Deduck does not know what the future holds for her following the Peace Corps, but is sure she would like to get her master’s degree through its programs and hopes to work and do research on an international level eventually.

“I leave a lot to the fact that the Peace Corps will change me and it will teach me a lot about myself and the world,” Deduck said. “I never thought as a freshman here that I would ever be qualified or even ready for making a two-year commitment to be in a developing nation, but because I have had those experiences and because I have been able to build myself into somebody that is qualified in order to do it, that gave me the confidence to be able to do it.”

Deduck’s father knew all along she was ready to take on the Peace Corps and reflects on the times he dropped her off at school. She kissed him goodbye, turned away and never looked back. And the Peace Corps will be another journey.

“It’s been a progression,” he said. “You know it was going away to college; a one week spring trip to Nicaragua was a leap, but only a week. And that went well. OK, then a semester Argentina. It’s been a real progression towards that point to where you say OK the Peace Corps is just another leap.”