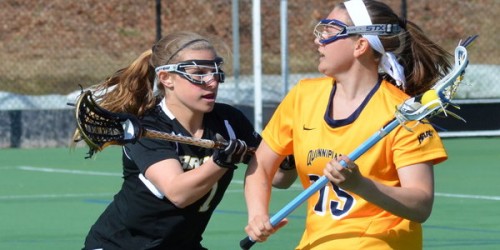 Former Quinnipiac women’s ice hockey star Kelly Babstock made her first appearance as a member of the women’s lacrosse team. She entered midway through the second half, scoring a goal and assisting on another.

“I think her competitiveness and her desire to win and compete is something I’m hoping will rub off on the rest of the team,” Quinnipiac Coach Danie Caro said on Babstock’s play. “You can tell she wants it. She’s not in lacrosse shape, yet. But she’s a great athlete and a great competitor. She obviously proved today she can add something to this team.”

In addition, sophomore Katie DeVito was the only player with multiple goals, scoring two. Seniors Michaela Tinsley and Kayla Fu each scored once, capping off the Bobcats scoring effort.

Junior goaltender Samantha Tilts was credited with the loss, making six saves on 21 shots. Sophomore Rachel Massicotte came in late in the second half, making one save on four shots.

For the Bulldogs, scoring was abundant. Lauren Descalzo and Kimberly Sniffen each came away with four goals. Shannon Burns and Lisa Vendel added two goals each and six other players each scored once.

“I think our biggest problem today was we failed to execute our gameplan,” Caro said. “We knew exactly what Bryant was going to do. We had what we thought was a good gameplan to stop them, but we did not execute on defense.”

Bryant tested the Quinnipiac defense early, starting the game by scoring eight straight goals in the first 14:22. DeVito came off the bench and broke that streak a minute later. The Bulldogs added six more goals to DeVito’s second to end the first half.

“When we went down early, I think we got very antsy,” Caro said. “We felt rushed on offense and ended up killing ourselves with turnovers.”

The Bobcats kept it close in the second half, being outscored only 4-3 by Bryant. The team found itself winning more faceoffs and ground balls and having more offensive possessions than it did in the first half.

“At halftime we were able to reset and remind them of what our gameplan was and what we needed to do in order to be effective,” Caro said on the change of play. “You want to stay positive. We also want to fire them up a little bit and remind them they need to have a little pride in the way they play.”

The Bobcats travel to Birmingham Sunday for their next game. The Bearcats sit on a 4-3 record while Quinnipiac is still searching for its first win.